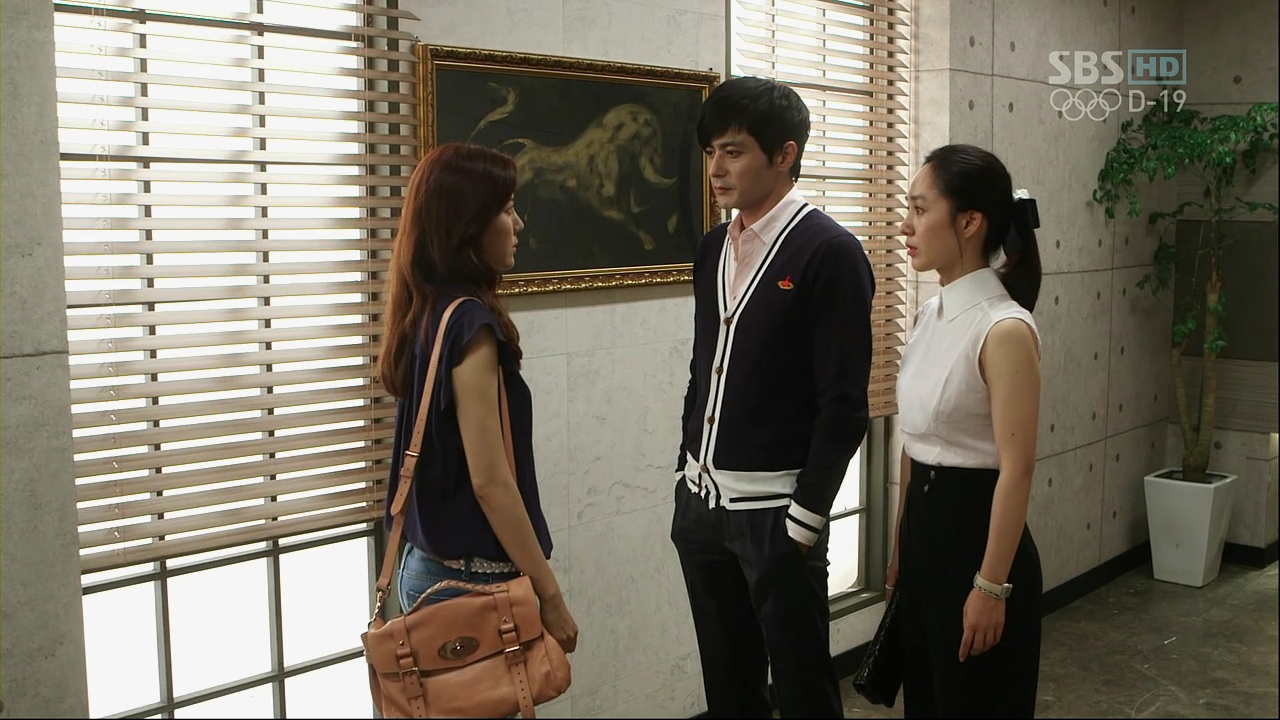 Click Here to Go to the Previous Episode Recap!

So..~ I’ve been following “A Gentleman’s Dignity” pretty closely, and decided that I would try out recapping. We have a new gallery function for Soompi, and I thought that it might be fun to read through a recap with the gallery feature! (Kind of like a comic book maybe?)

Anyways I hope you enjoy! Remember to leave comments, I enjoy reading your thoughts on the drama!

Because all the names are too long to write out here are the names that I will use for this recap:

The four gentleman together: 4G

First we open up with the 4G watching the classic Korean drama “The Hourglass.” They are watching the final episode. Jungrok comes in and shows off his new huge cellphone. The other 4G members start talking about what might happen in the future but actually does. (Buying water bottles, touchscreens, and the sort)

Dojin states that if they knew that the factious things they thought might happen in the future, could actually happen. They might have been very different. (The four are all dressed up as Steve Jobs)

First Dojin visits his now-girlfriend Yisoo in front of her school. He makes her promise to meet later. We are brought back to the ending of the last episode. Collin reveals that one of the 4G is his father.

The four sit around with Collin and learn that their first love “Eun Hee” (So weird that the 4 share a first love/crush) married a white male and have lived happy. Collin wanted to find his biological father. Dojin shocks everyone by saying that he is the father. Dojin asks everyone to leave the room.

Dojin talks with Collin and tells him to call his mother Eun Hee. The rest of the 4g are waiting outside listening in. However, Dojin needs to take a walk. (He is obviously shocked as well)

RUH OH! It looks as though this is the end for Yisoo and Dojin when they just started dating. She calls Dojin and is waiting for him to appear. But Dojin is watching from a distance, he probably doesn’t know what to do.

Minsook gets word about the situation through her bartender spy who works under Rok. She gathers all of the women on the show and breaks the news. They don’t know who Collin’s father is but it looks as though Yisoo seems to be suspicious. (Dojin isn’t picking up or calling)

Dojin is all moody and probably has a whole lot of mixed emotions going on. Yisoo actually goes all the way to Dojin’s home, but does not knock.

Father and son have a meal together. Dojin remarks “I ordered Korean food,” and Collin replies “I eat everything well.” Dojin asks about Collin’s father. Then Dojin states that he is going to meet with Collin’s mother Eun Hee.

Dojin talks with Eun Hee and asks how all of this happened. Dojin, “What happened? You just disappeared, and made your own choice. You made me into an idiot. You should’ve told me where you were at least.” Eun Hee explains that she was scared and that is why she fled. Eun Hee also states that she doesn’t want anything from Dojin. Dojin tells Eun Hee to stay in Korea and tells her where Collin is.

Mother and son meet, she is very pissed off. Collin speaks in fluent Japanese! Collin states that he knew it would be Dojin. Then, he asks her if she ever regret having him. She states that she has once, right now. (OUCH)

Yoon meets up with Meahri. Once again he doesn’t reveal much about what is going on. Meahri jumps to conclusion and states that she will raise Collin. Rok tells Yoon, Meahri is like several winning lotto tickets. Yoon states to himself, “That is why we can’t be together.” (I like Yoon’s character, but I’m getting kind of sick of the damaged goods act he always has)

Rok and Misook are together, she figures that Rok isn’t the father because he would have hid him somewhere she couldn’t find him. She suggests that Rok stays for dinner and can sleep over. (The end to this couple’s cold war perhaps?)

Rok finds a car key at his home. He wonders what the car is, and goes down to the garage. He is shocked to see that it is Hong Pro’s car!

Yisoo finally gets a call from Dojin. He says that he will go over, but Yisoo states that she will drive to him because she doesn’t want to wait.

DUN DUN DUN, he tells her that he can’t stay with her anymore. Also, he confirms that Collin is his son. Dojin tells her to go home safe. Yisoo reaches the first floor but Dojin calls the guard and tells him to hold her so she doesn’t drive.

Uggh, this really sucks for Yisoo. She is in tears while Dojin drives her home.

We are taken to Yisoo’s school again. Although Donghyub is being nice to the student that was mean to Yisoo. The student’s mother comes and slaps him in the face! Yisoo steps

Yisoo is drinking a beer alone at the stadium because of the stress. Taesan goes to visit her and asks if she is ok. She says no. Taesan explains that he would have done the same as Dojin. Taesan also stated that he just wanted to say something to her. Yisoo says of Taesan, “Thank you. I liked somebody that was very great.” Taesan says, “It was my honor.” (This scene really stood out for me, it kind of brings closure to the two, while still showing Taesan’s dignity)

Yisoo finally breaks the news to a worried Hong Pro.

Once again father and son eat together. Collin asks why Dojin keeps asking him to eat together. Dojin states that he wants to get closer. We get a glimmer of hope when Collin asks Dojin for a strand of hair to find out if Dojin is the real father.

Collin goes to Yoon with the strand of hair. However, Yoon being the smarty pants that he is, has already done a DNA test! It’s 99% likely that Dojin is the father.

Yisoo hears news that Donghyub is getting sued by the student’s mother. She runs to Yoon to get his lawyerly help.

At Yoon’s office, Yisoo runs into Dojin and Eun Hee. She tries to pass them by but Dojin grabs Yisoo’s arm. Dojin ends the episode with, “Let me introduce you two. This is Eunhee my ex-girlfriend. This is Yisoo, the one that I lost recently.” (KYAHHHHH)

Aigoo the heartbreak. Whyyyyyyyyyyyyy oh Whyyyyyy I know you have to because it is a Korean drama but Whyyyyyyyyyyyy. Sigh, usually while watching dramas I would be annoyed and stop watching at this point. But, this drama is so good that I am already too emotionally invested. I am in too deep! I can’t wait to see how things unravel in the next episode. Look forward to the next episode and recap, because I am!

What are your thoughts on the episode?