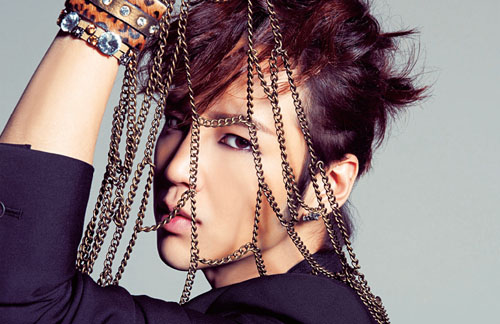 Back in June, Jang Geun Suk garnered much attention when he shared a picture of himself wearing a uniquely designed metal headband on twitter and commented, “I like this headband. I’m gonna make it a thing in Asia.” He named this headband “Straight-ahead Headband” and has been continuously wearing the item.

In many pictures he shared online, fans could easily spot this gold-colored headband. He wore it in real life, studying Chinese, having a meal, and at airports. The concept of headband for men is definitely something new and men usually are hesitant to give it a try, but Jang Geun Suk makes it look fashionable and natural even on men.

It turns out, Jang Geun Suk participated in the designing process of “Straight-ahead Headband” with jewelry designer Park Min Joo, who is also actress Park Si Yeon‘s younger sister. In fact, the product is distributed by Park Min Joo’s jewelry brand MZUU. A representative from MZUU commented, “Since Jang Geun Suk announced that he is going to make the ‘Straight-ahead Headband’ a trend in Asia, it has been selling really well to the point where customers have to wait for at least three weeks to receive the product after they place their orders.”

The representative added, “Currently, we just don’t have enough of ‘Straight-ahead Headband’ to sell in both online and offline markets. Due to such a big demand, customers have to wait for quite some time to receive the headband, so we are having a discount event on the product to appease these anticipating customers. The sales of this headband increased exponentially in both domestic and international markets. We are realizing Jang Geun Suk’s star power in Asian markets.”