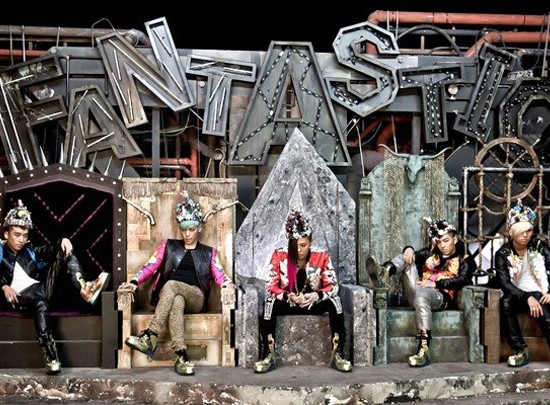 Big Bang’s “Fantastic Baby” has become the latest victim of Korea and Japan’s rocky relationship. Both Korean and Japanese netizens are criticizing the song, and the overall K-pop industry, for being played at the Japan Expo in Paris.

The controversy all started after a flash mob video of Big Bang’s “Fantastic Baby” was uploaded on YouTube. The 3-minute video, recorded at the Japan Expo in Paris, shows a cover dance team of about 10 members dancing to “Fantastic Baby.” They form a group in the center, in front of Big Bang’s poster and MV, for a pretty impressive dance performance at the exhibition, which reportedly brings in over 100,000 fans to its annual event.

The problem is the Japanese national flag hangs right next to Big Bang’s poster on the ceiling. Korean netizens are also furious over the fact that the song was the Japanese version of “Fantastic Baby.”

Korean netizens that saw the video are questioning why a K-Pop flash mob had to be held at the Japan Expo, and if it had to be the Japanese version of the song at all – and more than anything, they are infuriated by the Japanese national flag’s presence right next to Big Bang’s posters.

Some of the other Korean netizen comments include, “This is all happening because K-Pop unnecessarily came out with too many Japanese lyric songs,” Hallyu is supposed to make me feel good, but this just ruined my day – what a shame,” and “Korean agencies are just looking for the money – have some pride in your country!”

Japanese netizens also criticized the video, as they commented, “Why are Korean artists using Japan Expo to make extra money?” and “Korea has no national pride if it’s for the money.”