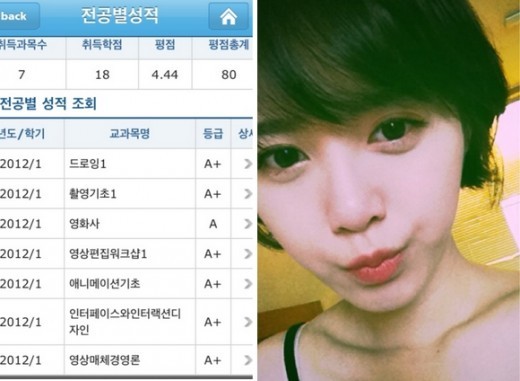 On July 14, Goo tweeted, “I was actually number one in school” and attached a photo of her report card. With a GPA of 4.44, Goo Hye Sun was number one of 52 students in her department. She received A+’s in all but one of seven classes, including Drawing 1, Intro to Animation, and Video Editing Workshop 1.

Netizens who came upon the report card commented, “Her face is pretty, and she’s smart, too..”, “What is she not good at? The world is unfair,” “How proud she must have been of herself to reveal her own report card,” and more.

Meanwhile, Goo Hye Sun matriculated into Sung Kyun Kwan University as an Arts Major last year. In the past, Goo Hye Sun has also received a warm reception from the public when she was seen taking public transportation to school.