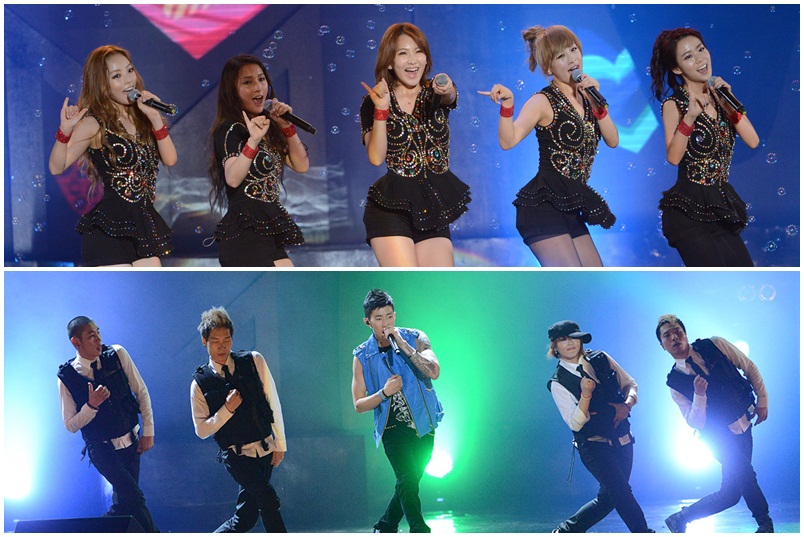 The weather in Malaysia was humid and scorching hot on last Saturday where MTV World Stage Live in Malaysia 2012 was scheduled to take place at Sunway Lagoon, a popular water theme park in Kuala Lumpur, Malaysia. Featuring a big-name lineup with Justin Bieber, Jay Park, Kara, and Mizz Nina, nothing could stop the ardent fans from camping outside the venue with much anticipation since early morning. Having met Kara and Jay Park through group interviews on last Friday where they both promised an exciting show, I was looking forward to the concert as well, and was there three hours before media registration was set to begin.

Everyone was feeling thankful as the sun began to set and was taken over by a cool evening breeze. However, this did not last for long! When Justin Bieber took to the stage to kick off the opening act, the 16,000-strong crowd cheered loudly and danced to his first song of the night — the smash hit “Baby.” Bieber continued to heat up the atmosphere as he belted out “All Around the World,” “As Long As You Love Me,” and acoustic performances “Die in Your Arms,” “Be Alright,” and “One Time,” followed by “Never Say Never” and closed with “Boyfriend,” which of course left all the Beliebers yearning for more. Female fans were heard screaming “Marry me, Bieber!” and some fans even fainted from excitement of watching Justin Bieber performing live!

During a fifteen-minute break, most of Bieber’s die-hard fans kindly moved aside to let the K-Pop fans go forward to support their idols from closer range. Kara was next to take to the stage, all dressed in black outfits with shiny colorful jewels. This being their first public appearance in Malaysia, Kara kicked off their set with high-energy dance medley comprising “Step,” “Jumping,” “Lupin,” “Let It Go,” “Honey,” and “Mister.” They stopped only for a short while between the songs to make their self-introduction. Before they left the stage, they each said “Terima kasih” (“Thank you” in Bahasa Malayu) in such a cute way, even the hard-to-impress media friends were seen smiling!

Malaysian artist Mizz Nina was third on the lineup, opening her set with “Just Do It” and then going into “Takeover” and “Hit Me Up.” With her powerful vocals and slick dance moves, it was effortless for Mizz Nina to engage the audience as she brought the whole house jumping on their feet. The crowd also cheer her on during her performances of “Rentak Yang Sama,” “With You,” “Summer Burning,” and lastly “What You Waiting For?” I was quite amazed when I heard from my friend after the show that Mizz Nina was formerly a radio deejay!

Saving the best for last, Jay Park kicked off his set with “AOM and 1llionaire” and kept the audience entertained with “Abandoned,” “Know Your Name,” and “Carefree.” He followed up with a medley of “Nothing,” “Girlfriend,” “I Got Your Back,” “Star,” “Turn Off Your Phone,” and “Do What We Do,” before closing the show with “Body2Body.” Jay delivered a spectacular performance, much more than what he promised!

Do look out for our interview articles on Kara and Jay Park!

Shot in high-definition, “MTV World Stage Live in Malaysia 2012” will be produced into a two-hour TV show premiering on MTV SEA channel on Saturday, July 28, at 12:30 PM (WIB), 1:30 PM (SG/HK/PHIL), and 2:30 PM (MAL). An hour-long version will also broadcast later in the year via MTV’s global network of more than 60 channels in over 150 territories, reaching over 600 million households.

MTV World Stage Live in Malaysia 2012 is sponsored by Sunway Resort City, Lenovo, Xpax, Twisties, and Hong Leong Bank, and supported by MyCeb of the Ministry of Tourism and broadcast partner Astro. Soompi would like to thank MTV Asia for inviting us to cover the event!

Photo credit: MTV Asia and respective photographers as labeled on the photos