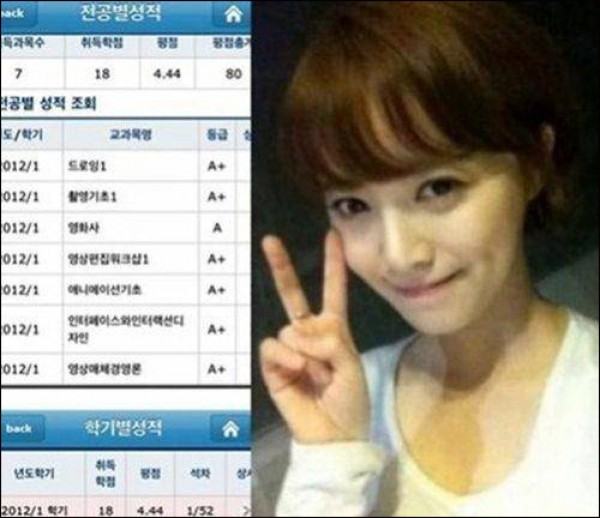 Actress Goo Hye Sun revealed her report card for the semester on twitter. Currently, Goo Hye Sun is enrolled at Sungkyunkwan University in Korea. Out of seven classes she took in the semester, Goo Hye Sun received A+ in six classes and an A in one class. She completed total of 18 credits in this semester and received 4.44 in GPA, which makes her the top of Film, Television, and Multimedia department.

Upon revealing her grades, Goo Hye Sun wrote, “To be honest, I got the first place in school.” After several inquiries regarding her grades and scholarships were made, Goo Hye Sun added, “I am going to donate my scholarship to another student in need. It’s called, ‘studying to give away.'”

Fans and netizens commented on Goo Hye Sun’s stellar grades, “She literally is studying to give her scholarship away to someone else,” “A true mother’s friend’s daughter,” and “So is there anything you are not good at?”

Goo Hye Sun
Sungkyunkwan University
How does this article make you feel?