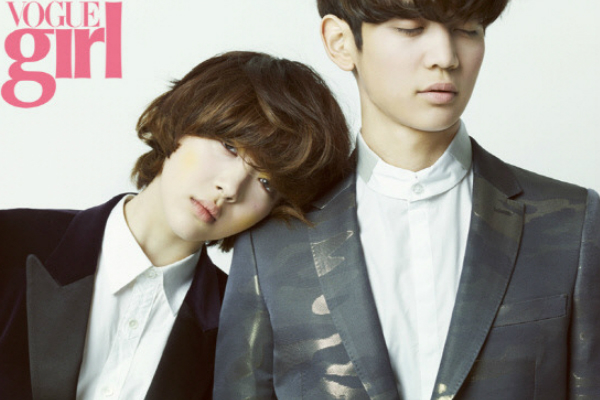 “To the Beautiful You” leads Sulli of f(x) and Minho of SHINee are featured on the new issue of “Vogue Girl” magazine Korea. The two acting idols are channelling their drama characters for the shoot, with the usually feminine Sulli already sporting short hair for her role.

In “To the Beautiful You,” Sulli plays Goo Jae Hee, a diehard fan of high jump athlete Kang Tae Joon (Minho.) Jae Hee masquerades as a guy to get closer to Tae Joon, on whom she has a serious crush. In the story, Tae Joon suffers from an injury and is struggling to make a comeback.

“There was a burden and a pressure to work hard being offered a starring role but I thought I should do it,” Sulli said in the interview that accompanied the shoot.

“I hope to show a different take on the character that I’m going to play, different from how Oguri Shun did in the Japanese version,” Minho, on the other hand said.

“To the Beautiful You” is an adaptation of a Japanese manga, “Hana Kimi.” The Korean adaptation is the fourth drama version.

Sulli and Minho’s photoshoot is in the August issue of “Vogue Girl.” Their drama likewise premieres on SBS in August.

SHINee
f(x)
Minho
Sulli
KPLG
To the Beautiful You
How does this article make you feel?