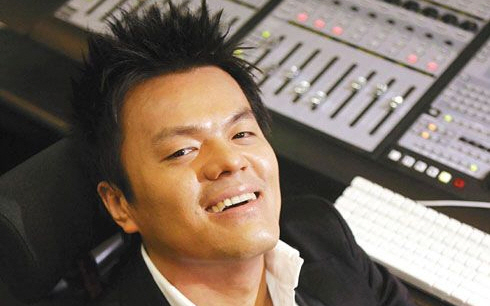 Park Jin Young, who is a newly transformed movie actor with his role in the film “5 Million Dollar Man,” revealed the artists he feels uses the perfect combination of “half air and half sound” technique.

Recently, JYP made an appearance on the July 17 radio broadcast of SBS Power FM’s “Choi Hwa Jung’s Power Time.” During the show JYP gave a sincere interview as well as a wonderful live performance for listeners.

He discussed the topic of song composition and that it should be made up of the perfect “half air and half sound” method. The style became famous during the popular SBS reality show “K-Pop Star.” DJ Choi Hwa Jung asked, “Which singers do you think uses the perfect half air, half sound method?” To which J.Y.P replied, “I would say Kim Gun Mo, Kim Bum Soo, and among the female artists, Ga In of Brown Eyed Girls.”

Additionally, J.Y.P was asked, “Out of all the female celebrities who would he want to ride in an elevator with?” He ended up choosing actress Lee Young Ae. “I feel she has a very attractive charm about her and a great smile,” he remarked sharing his candid thoughts.