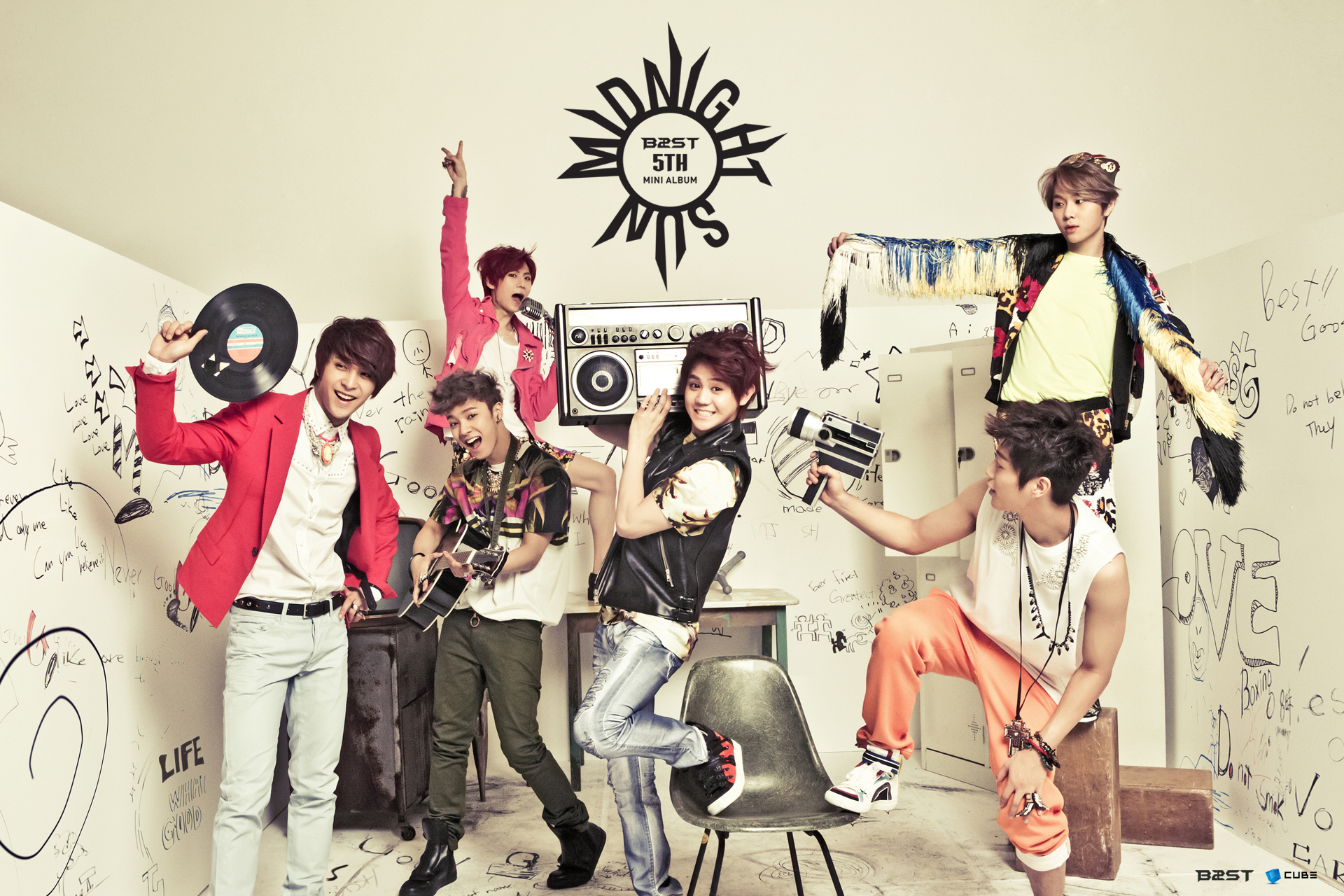 BEAST Shares Their Worries Regarding “Midnight Sun” in Recent Interview

Change. That is the theme of BEAST’s latest release. The members have dyed their hair and tried out a variety of styles. Instead of their usual hip-hop fashion they donned colorful costumes. Their latest music video is playful, getting away from the precise choreography and portraying the members as free-spirits partying on the streets of New York. After a year and two month hiatus the group releases their fifth mini-album, “Midnight Sun” to officially announce the return of BEAST.

BEAST is working with a new team of composers. Their title track “Beautiful Night” was composed by Goodnite, Sleep Well. It is an example of an Electronic Synth-Pop track which shows off each of the members distinctive vocals, which is uncommon for that genre of music. It is a fresh and original song which combines electronic sounds and the emotions of BEAST.

Through the official fan café member Yang Yoseob shared, “I am afraid of change. This is the first time where we will be trying electronic music, there were lots of worries and frustration. The truth is the element of change is what actually worries us.”

He continued, “We hope to incorporate our experience from the world tour into this album. We feel that our interactions with the audience and fans is lacking. Hopefully with this album we are able to compensate a little. We will show you our free yet handsome, youthful appearance.”

It was unanimous with the six members that changes had to take place. They chose what would ultimately be added to the album, but it was still unknown whether the fans would accept it or not.

“Our fans waited for a long period of time for us. If we were to show our normal selves, it wouldn’t be anything big, so we were worried about doing so, that we would disappoint them. After we thought it over we decided to put out the best album and in turn we would gain confidence from it.”

“Not Me” is said to feature a solo dance performed by vocalist Yang Yoseob taking him out of his comfort zone. Yoseob commented, “I have been working hard to prepare for it. When rehearsal ends I continue to practice until the sun comes up. My theory is that our choreographer knows I am unsure about my dancing ability, so he gave me this part to help me become more confident.”

They have no regrets about their decision. The album was originally scheduled to be released in May but the group had chosen to postpone it until July. Rapper Yong Jun Hyung explained, “Of course we were nervous, but we wanted to bring the fans a good song for our comeback. The reason for our delay was actually because of this.” The choice reflected the group’s individual opinions as this album includes the most participation from each of the members. Yong Jun Hyung took an active role in the album’s creation as he participated in penning lyrics for “Midnight” and “If I Miss You,” as well as the composing and writing of “The Day You Rest” and “Dream Girl.” The members poured their feedback into the album’s concept, style, songs, and music video. Yong Jun Hyung commented on the experience, “All of us have very different opinions from those around us, yet we are still insecure about all these changes we’ve made. Ultimately we wanted to show ourselves in a new, confident light on stage, so we decided to use (Beautiful Night) as our title track.”

Leader Yoon Doojoon contributed, “It is not that we want to challenge or break out from idols’ music style, we want to resist it. We had to make little changes to an extent which would be acceptable with the public.”

Dongwoon followed up by saying, “To change our music style after three years is a very difficult thing to do. Up until now we had confusing thoughts of, ‘Are we doing it right?’ But the six of us were confident initially about our title track, so if it is any good or not didn’t matter to us because we put everything we had into it. In the end we have no regrets.”

Jang Hyun Seung shared his hopes, “This album looks at the various goals we would like to accomplish, first we recognized that we want to make music. Second, we hope to win an award soon. We would like to place first four times in a row. Although we aren’t overly concerned about winning awards, I still hope that we will have meaningful promotions.”

Lee Kikwang added, “We will be promoting as long as we are loved, right? Haha! Psy senior has been receiving much love from the public. I hope that you will show us some of that love as well.”

The new look of Beast will be presented through their live performances of “Beautiful Night” and “Not Me.” The group’s first comeback appearance on KBS 2TV’s “Music Bank” was scheduled to air on July 27. But because of the broadcast of the Olympics Beast’s comeback stage on “Music Bank” will air after the Olympics on August 3.