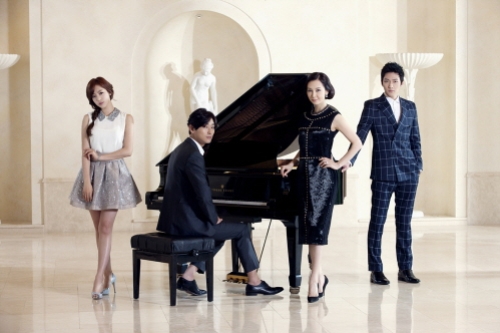 Poster stills for the upcoming SBS weekend drama, “Five Fingers” have been revealed.

Since the drama is about music, there is a piano in the center of each still. The four actors are portrayed beautifully but with a slight touch of sadness. Therefore, much curiosity and anticipation are being garnered as to what this drama would entail.

Joo Ji Hoon will transform into a genius pianist with absolute pitch. Rather than her signature short bob, Ham Eunjung will be sporting a long hairstyle, which makes her look feminine and lovely. Ji Chang Wook will be playing the villanous role and in order to emphasis his character’s sharp image, he did not smile in any of the photos. Chae Si Ra shows off her elegant beauty by wearing glamorous outfits.

A staff member commented, “As you can see by the poster, this drama will be more heartwrenching and interesting than any other music drama. The fateful stories of the four characters will be strongly portrayed.”

“Five Fingers” will air in August, following the end of the current drama, “A Gentleman’s Dignity.”