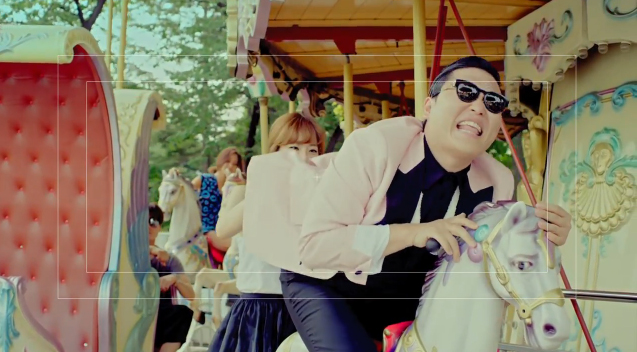 After releasing his sixth album “PSY6甲” and his amazingly fun music video for “Gangnam Style” last week, PSY has now released the making of video.

Starting out with him dancing as he crosses a busy street, we get to see behind the scenes footage from many of the different locations seen in the music video. Instead of having an elaborate pre-made set to dance on, he shot scenes on a merry-go-round, tennis court, playground, riverside (yoga), boat, spa, horse stables. Celebrity cameo scenes include Yoo Jaesuk in a parking garage, Noh Hongchul in an elevator and Hyuna in a subway station.

Throughout the whole video, everyone seems to be having a lot of fun with the dance and concept. Whenever they went to review the newly shot footage, everyone just bursts out laughing.

Eat Your Kimchi reviewed the music video earlier this week and described the deep, profound, philosophy-changing symbolism in the video.