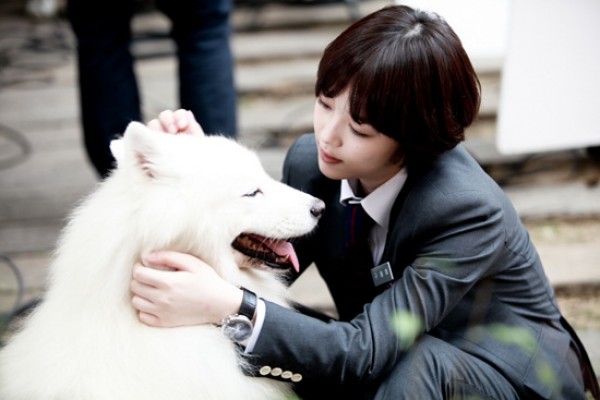 Recently, f(x)‘s Sulli struggled with a new acting partner, a 15kg Samoyed named Sangchoo, on the filming set of SBS “To the Beautiful You.” Sulli plays the role of Goo Jae Hee, a young, lively, and brave teenage girl who disguises herself as a boy to transfer to an all-male physical education school to meet her idol, Kang Tae Joon (played by SHINee‘s Minho).

In this particular scene, Sulli dressed in boys’ uniform is confronted with a large white dog, Shangchoo. At the dog house, there is a somewhat threatening sign that reads, “He won’t bite as long as you don’t come near him!” Sulli falls on her butt when she sees Sangchoo. This adorable and yet threatening confrontation of Sulli and Sangchoo is arousing curiosity among viewers and fans already.

The filming of this particular scene didn’t go so smoothly and they had to retake the scene multiple times. However, Sulli continuously petted Sangchoo and played with him throughout the filming. Sangchoo will play a very important messenger role between Goo Jae Hee and Kang Tae Joon in “To the Beautiful You.” This lucky dog came through a competition of 8 to 1 and got the role. Although this is his first time acting, he adopted to the environment very well and has become a lovely friend and colleague on the filming set.

The production company commented, “As ‘To the Beautiful You’ is about a girl pretends to be a boy and transferring to an all-male high school, Sulli will be faced with many challenges throughout the drama. The confrontation with Sangchoo is one of them. Please pay close attention to Sulli and ‘To the Beautiful You’ to see how Sulli overcomes all these difficulties and challenges.”

SHINee
f(x)
Minho
Sulli
To the Beautiful You
Sangchoo
How does this article make you feel?