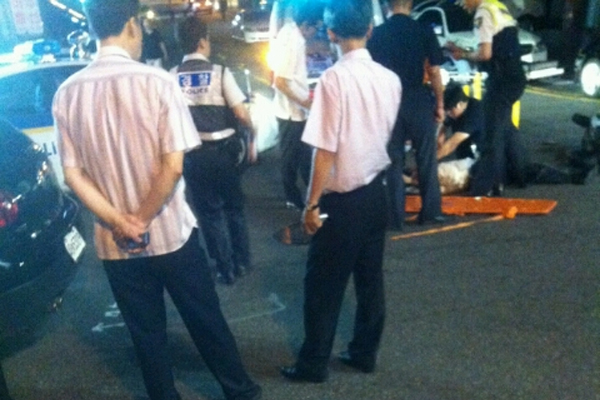 The Condition of Motorcyclist Involved in Accident With Nichkhun Released

Nichkhun, member of idol group 2PM, was involved in a car accident earlier this week where a motorcyclist was injured.

The motorcyclist, who was involved in the accident, was quite shaken up as paramedics transported him to a nearby hospital in Seoul. At the time of the accident he was bleeding from the back of his head and his ears. He also was complaining of back and shoulder pain. When he first arrived at the hospital he underwent treatment for torn cartilage in his ear, and also received X-Rays and CAT scans.

The day of the incident the victim was taken to Konkuk University Hospital, but has since been transferred to a Gangnam area hospital where he is receiving treatment.

Acquaintances of the cyclist commented on his situation saying, “Somehow it seems to have taken a while for him to receive treatment,” he continued, “The biggest problem is his back. His current condition makes it difficult for him to watch TV in bed for more than 20 minutes. He is under 24 hour care because he is unable to move without assistance.”

Recently, there was much debate among what happened. As witness came out to share their stories, each account contradicted the last and led to more confusion. To clear all this up once and for all the CCTV footage recovered from the night of the accident has been revealed.

On the morning of July 24, 2PM’s Nichkhun was involved in accident where a motorcyclist had been injured. Nichkhun was found to have a blood alcohol level of .05 which is over the legal limit in Korea. At this time Nichkhun has taken time to reflect on his actions.

accident
Nichkhun
motorcyclist
How does this article make you feel?