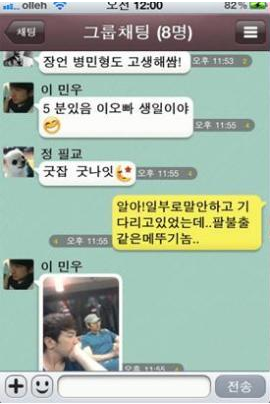 On July 28, Eric posted on his Twitter, “Today is the birthday of the rapper, singer, choreographer, and self-proclaimed cool guy, Minwoo. I was going to wish him a happy birthday anyway, but he must have been anxious because he’s asking for congratulations,” along with the screen shot.

In the screen shot, the conversation between members Hyesung, Minwoo, and Eric is shown. Lee Minwoo wrote, “In 5 minutes, it’ll be this oppa’s birthday.” In response, Shin Hyesung wrote, “Good job. Good night,” as though he was annoyed. Eric then responded, “I know! I wasn’t saying anything on purpose, you dimwitted grasshopper.”

Eric then posted to his followers, “This is a time (he) needs your congratulations. Oh yeah. A little while ago, ShinCom’s co-presidents Eric and Minbong concluded an important meeting with some representatives. Today is a day everybody can smile.”