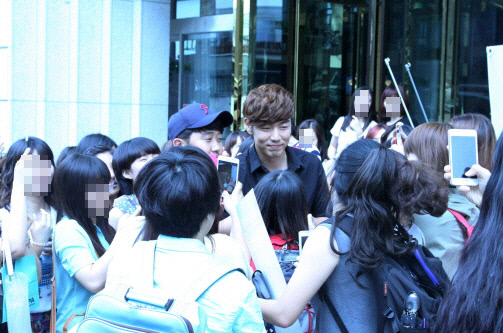 Actor Lee Jong Hyuk has been experiencing idol-like popularity as of late.

Fans could be seen trying to take photos with cell phones, as well as asking for Lee’s autograph. As a result, there was a traffic jam in the area on this day.

Even though Lee Jong Hyuk was quickly trying to move to his next filming schedule, he made eye contact with all the fans who had come to see him and showed his appreciation with his “manner smile.”

Lee Jong Hyuk revealed through his agency, “Thank you so much for all people who have shown their love. Your support gives me great strength. I will show you great acting to repay you all. I hope for much love for ‘A Gentleman’s Dignity.'”

Lee Jong Hyuk is taking part in “A Gentleman’s Dignity” as the “cute womanizer” Lee Jung Rok. There is much anticipation for the end of the drama after his on-screen wife Park Min Sook (Kim Jung Nan) decided to have a divorce. A Gentleman's Dignity
Lee Jong Hyuk
KPLG
How does this article make you feel?