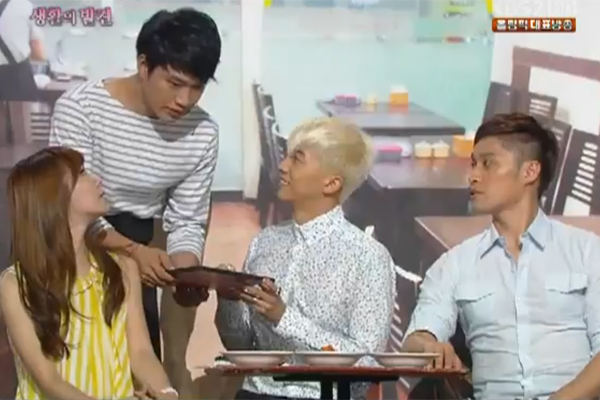 Newly turned solo-artist, Wooyoung, appeared on the July 29 broadcast of KBS 2TV’s “Gag Concert-Discovery of Life.” During the show Wooyoung displayed his flair for variety. In one segment Wooyoung posed as comedian Shin Bo Ra’s new boyfriend. During the skit, it featured a humorous break-up and the 2PM member as a prima donna.

Shin Bora introduced Wooyoung as a, “cute and sexy wild man.” Song Jun Keun told Wooyoung that he looked like an anchovy to which Wooyoung told him, in true diva fashion, “Do not take my picture. You are not allowed to photograph me,” which drew laughs from the audience. When the waiter handed Wooyoung the menu he egotistically replied, “I’ll give you my autograph later.”

Upon receiving a message of spam from a loan shark, Wooyoung said, “A stalker keeps sending me text messages, he wants to lend me some money.” He also had a kiss scene with Shin Bo Ra which elicited screams from the audience.

Song Jun Keun had asked Shin Bo Ra a difficult question, “Would you still have picked Wooyoung if Taecyeon had also proposed to you?” Her response embarrassed Wooyoung as she wasn’t able to give an answer.

2PM
Gag Concert
KPLG
Jang Wooyoung
How does this article make you feel?