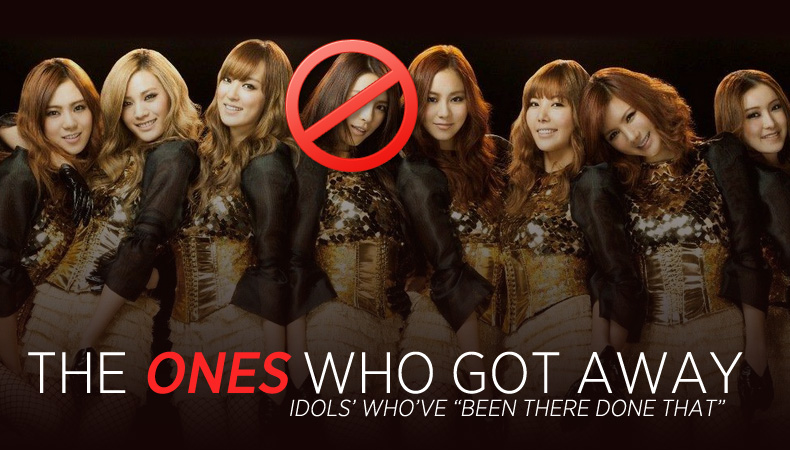 K-Pop Idols: The Ones Who Got Away

Following the controversy surrounding Hwayoung and other members of T-ara, the CEO of Core Contents Media, Kim Kwang Soo, announced today that they have decided to end Hwayoung’s contract with T-ara and CCM with no conditions. The situation has led us to research some of the past instances where idols have decided to (or forced to) leave their group.

Click on the arrows at the bottom right of the black box to scroll through the list!

Following a controversial post on his SNS account about Korea, Jay Park announced that he would leave 2PM to take responsibility of his past actions. In 2009, he left both the group and the country to reflect and find peace.

Due to health reasons, HyunA left the Wonder Girls in 2007. Shortly after, JYP Entertainment replaced her with Yoobin. In 2008, she joined Cube Entertainment and made her comeback with 4minute in 2009.

Sunmi withdrew from the Wonder Girls in 2010 to focus on her education in South Korea. She was replaced by Hyelim.

Jaejoong, Yoochun, and Junsu broke away from DBSK in 2009 and formed a trio called JYJ.

After School’s Yoo So Young

Yoo So Young left After School in 2009 due to health deterioration. After a short break away from the entertainment industry, she returned as an actress.

In 2011, Bekah decided to withdraw from After School to pursue a career as a designer.

Kahi “graduated” After School this year to focus on her solo career.

Kim Sung Hee left Kara and the music industry in 2008 to concentrate on her studies. Stories are that Kim Sung Hee promised her father that she would not neglect her studies while working with Kara, which wasn’t the case because of their hectic schedules. The former Kara vocalist got married in May 2011.

FT Island’s guitarist and sub-vocalist Oh Wonbin left the group in 2009, citing musical differences. Approximately two years later, he returned to the music scene as a solo artist with a new single titled “I Love You and I Love You.”

In 2009, Nam Gyuri left SeeYa, stating that she was more interested in acting than singing. After breaking ties with Core Contents Media, she returned to the music industry as a solo artist. Nam Gyuri also established herself as a hallyu actress, appearing in numerous hit dramas, as well as a Chinese drama.

In February 2011, U-Kiss announced that Kim Kibum would be leaving the group, surprising their fans. Following the news, Kim Kibum disclosed that he did not quit, but rather that his agency unilaterally canceled his contract, forcing him to sign an agreement.

Alexander (aka Xander) withdrew from U-Kiss the same time Kibum did. According to NH Media, Alexander left the group due to personal reasons, as well as to focus on his academic career.

After promotions for “Sohpisticated” ended in January 2010, Jewelry’s Seo In Young left the group to focus on her solo activities. Since then, Seo In Young has released several solo albums and has garnered much attention for her powerful vocals.

In December 2009, Star Empire Entertainment announced Park Jung Ah and Seo In Young’s departure from Jewelry. Both members had been part of the group for over ten years. Unlike Seo In Young, Park Jung Ah concentrated on up her acting career, appearing in numerous dramas like “Princess Prosecutor,” “Smile, Donghae,” and “Only You.”

Keon Woo is the latest and fifth member to withdraw from LEDApple. Due to health issues, he decided to discontinue activities as a LEDApple member and focus on music composition.