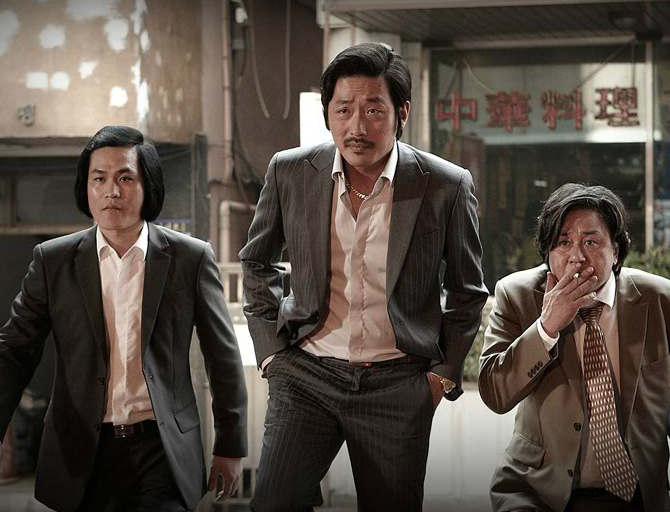 In the past, “Kim Doo Han” was a crime boss leader that actually did resist the Japanese annexation of South Korea, however his rise to power came after South Korea’s independence. “Kim Doo Han” and his story is constantly retold into different romanticized versions and he has become somewhat of a legend.

Often times the Korean Mafia is shown as being fiercely loyal, and there is a certain “culture” that is prevalent. (For example, having dragon tattoos, wearing suits, and speaking the Gyeongsang dialect) Most films have themes of friendship, loyalty, love, revenge, and betrayal.

Here are the must see 14 “Korean Mafia” films, enjoy the corruption!

If this list were titled “10 Mafia Films You Need to Watch Before You Die,” this movie would make that list. The film stars Jang Dong Gun, Yoo Oh Sung, Seo Tae Hwa, and Jeong Woon Taek. The story revolves around 4 friends and 2 of them who become Korean mobsters. “Friend” is probably the best “Korean Mafia” film of all-time.

Currently “The Nameless Gangster” is the most popular “Korean Mafia” film released as of late. The story is about a mafia boss and his distant uncle. Based in the 1980s the story is both realistic and the acting by Choi Min Sik and Ha Jung Woo is superb.

Jo In Sung plays “Byung-Doo” who is the No.2 man in a small time gang. He goes on a dangerous secret mission! If he succeeds he will be able to provide for his family which is made up by his mother and two younger siblings.

Beat doesn’t really portray much about mafias (except that Yoo Oh Sung is a part of the mafia and Jung Woo Sung fights for it), but this is still a classic film. The three male characters are portrayed by Lim Chang Jung, Yoo Oh Sung, and Jung Woo Sung. Go So Young is the female lead of the film.

Number 3 is a hilarious and action-packed film about Korean mobsters fighting for the number one spot in a mafia. The film stars Han Suk Kyu, Choi Min Sik, and Song Kang Ho.

Jessica Folker’s rendition of “Goodbye” was the main theme song for the film. After this film was released, everybody was singing “Goodbye” at karaoke. The film stars Park Shin Yang and Jeon Do Yeon. Park Shin Yang plays “Kong Sang Du” who is a mafia boss that falls in love with the nurse “Chae Hi Ji” played by Jeon Do Yeon.

My Wife Is a Gangster Series

The film stars Shin Eun Kyung, Park Sang Myun, and Ahn Jae Mo. Shin Eun Kyung plays “Eunjin” who is a legendary gangster. She ends up marrying an ordinary civil servant “Soo Il” played by Park Sang Myun. The film is also a mix of comedy and action. A huge plot of the film is that Eunjin’s sister asks her to have a baby for her.

This film is a comedy one with an interesting premise. One of the bosses of a mafia Kye Du Shik (Played by Jung Jun Ho) goes back to high school in order to go up the ranks.

Glory of the Family Series

The “Glory of the Family” series is popular in South Korea. The first film was about a man marrying a woman who was the daughter of a legendary mafia family. The films that followed continued this theme of a comedic mafia family.

This film stars Ryoo Seung Wan, Jeong Doo Hong, and Lee Bum Soo. A detective that fights organized crime goes to his high school friend’s funeral. While investigating the circumstances of the friend’s death, the two friends that investigate face off against the third friend.

The film stars Lee Sung Jae, Cha Seung Won, and Kim Hye Soo. The story is about a highschool misfit who becomes a teacher that ends up meeting the valedictorian who has become a mafia boss. A love triangle is formed because both male characters love Kim Hye Soo’s character, but she isn’t all what she seems as well…

This film is a classic “Korean Mafia” film as it shows how a normal individual walks down the path of crime and corruption. The film stars Han Suk Kyu, Shim Hye Jin, and Moon Seong Geun. The film is emotionally charged and is haunting at the same time.

As I explained in the introduction, this film is a fictionalized story about “Kim Doo Han.” This film is also considered a classic and it starred Park Sang Min, Shin Hyun Joon, Lee Il Jae, and Kim Hyung Il.

Now, this film doesn’t really belong in the list because it doesn’t really have any mafia members as its main cast. However, this ultra-violent does show its protagonist who is played by Won Bin, fighting against organized crime. The film was very dark but highly enjoyable.
So have you watched most of these films? What are your thoughts on Korean mafia movies? Don’t forget to comment below!
Cha Seung Won
Choi Min Sik
Ha Jung Woo
Jang Dong Gun
The Man from Nowhere
Won Bin
Yoo Oh Sung
Han Suk Kyu
Friend
The Nameless Gangster
How does this article make you feel?