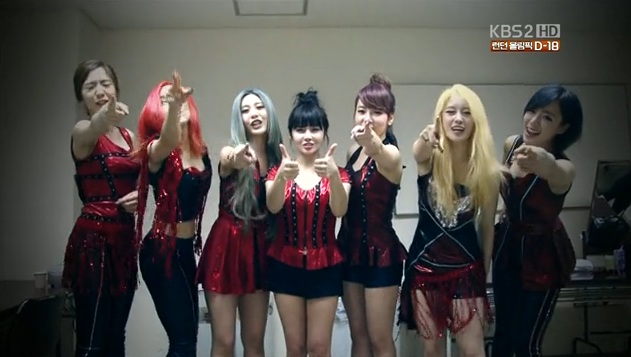 It’s been a crazy week with Hwayoung parting ways with T-ara on Monday. We’ve covered the topic extensively over the past few days, and it looks like the story only continues to get uglier by the day.

Most of our readers are probably getting tired of this whole T-ara/Hwayoung controversy, and we apologize for bringing yet another article on this subject matter. But it seems like a lot of our readers are still questioning where this whole “bullying theory” first came from. We’ve been flooded by the same question in the last 48 hours, and here we’d like to answer that question with evidence provided by Korean netizens.

Of course, this is all speculation and we can’t jump to conclusions, but the photos and videos listed in this article will certainly make you think about the whole situation again.

At the beginning of T-ara’s episode of KBS “Star Life Theater,” all the group members lined up to give an introductory greeting. As all the members pointed at the camera, to signal the start of the show, Hyomin oddly strikes her finger upwards, and accidentally pokes her finger at Hwayoung’s face.

On a Japanese variety show, Jiyeon rolls her bowling ball and comes back high-fiving each of the T-ara members. But intentionally or not, she skips Hwayoung, who was sitting in the first seat.

During the “Idol Olympics,” Boram “attacks” Hwayoung from the back and breaks her umbrella.

During KBS “Star Life Theater,” the whole group lines up again and Hyomin cracks a joke. Hwayoung, by herself at the far left again, seems like the only not getting the joke, and just stares at the floor, while the rest of the group laughs out loud.

No Dumplings for Hwayoung

In another scene from KBS “Star Life Theater,” Soyeon and Boram are busy cooking dumplings for the group. But as they drop the dumplings in the pot to boil it, Boram says, “The water’s going to spill over if we put in Hwayoung’s.” They end up not putting Hwayoung’s dumpling in the pot.

Acorn in a Dog’s Bowl

Hwayoung shared this rather cute photo on her Twitter, saying it was a gift from Jiyeon. The photo shows a lego picture of a dog standing in front of a bowl full of acorn. But the old Korean saying, “Acorn in a dog’s bowl,” is supposed to mean an outcast.

After winning an online popularity poll, Jiyeon posted on her smartphone, “I won first place in a popularity poll, so I’m sharing this picture~Oh, and Hwayoung got 0 votes haha. Our poor Hwayoung…keke.”

Hwayoung Reading a Book Because of the Camera?

Again from “Star Life Theater,” Hwayoung opens a book to read it in the car, and the production team asks, “Oh, Hwayoung, it looks like you enjoy reading.” As Hwayoung gets ready to answer, Jiyeon jumps in and says, “It’s because of the camera. Wow, you’re really funny. I’ve never seen Hwayoung read a book while being in the same group.”

During a Japanese variety show, Eunjung somehow picks Hwayoung as the person to eat the rice cake. But instead of just handing over the rice cake, she stuffs it in Hwayoung’s mouth, and Hwayoung ends up giving a disgusted look.

Hwayoung with SISTAR and Infinite

During the “Idol Olympics,” Hwayoung was sitting all by herself, so SISTAR’s Bora and Infinite members went to give her company. They snap a photo together, but none of the T-ara members are in the photo.