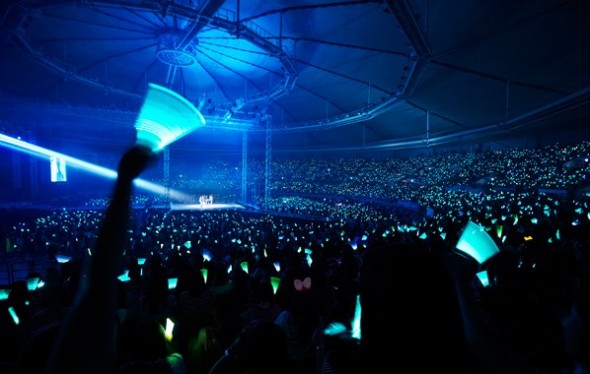 On July 21 and 22, “SHINee World Concert II” kicked off its world tour in Seoul. SHINee, who celebrated their fourth birthday last May, performed in front twenty thousand Shawols. Soompi covered the three-hour-long extravaganza just for you!

From “Replay” to “Sherlock,” the group performed all its hit songs — more than thirty of them. They debuted the Korean version of “Seesaw,” and for the Japanese audience who came to the concert, they performed “Always Love” and “To Your Heart” in Japanese.

Throughout the concert, the five members were able to play different characters. They went from being prisoners of an Native American tribe in “Always Love,” to kings performing magic tricks, and choirboys with the song “Amazing Grace.”

Fans were also able to enjoy several videos where the boys could be seen as universe saviors, street fighters, and even defectors pursued by men in black. Closer to the image we know them, they also slept in high school student uniforms for one video which also featured f(x)’s Sulli. A surprise also awaited fans with the “Tie A Yellow Ribbon Round The Old Oak Tree” video, in which lovely Taemin appeared as a girl!

Solo performances showed the personality and unique style of each member. Minho started with Chris Brown’s song, “Turn Up The Music.” Onew performed a medley of Jason Mraz’s “I Won’t Give Up” and Toy featuring Lee Jee Hyeong’s “Passionate Goodbye.” Taemin‘s stage was probably the one that showed the biggest evolution. With the song “Get Up” by KORN, the group maknae proved he wasn’t a kid anymore, being very much at ease with the metal/rock influences of the song and very explicit lyrics. Key was his usual self while performing Lady Gaga’s “Hair” and “Judas.” Lastly, Jonghyun sang the powerful and touching song, “Y Si Fuera Ella.”

The concert had its fair share of memorable moments, although it was probably Jonghyun and Taemin’s duet on Seo Taiji’s “Internet Wars” that struck fans the most. For this stage, Jonghyun appeared first with no shirt on, numerous fanbase names on his chest. Taemin then joined him on stage for a very close face-to-face that even lead many fans thinking they kissed.

Touching moments weren’t in rest during the concert, though. Each member prepared a letter for Shawols mainly to thank them for their unconditional support. Very emotional after this episode, the boys sang “The Name I Loved” with tears in their voices. Fans then started singing along, creating a beautiful moment between SHINee and their fans. Shawols had also prepared a surprise for the group during this performance. At the first concert, the words “SHINee” appeared in red in the ocean of green lightsticks. During the second concert, the audience held up the touching slogan “Tomorrow Too, We Will Love You.”

The concert ended on a lighter note as SHINee bank notes and multicolor balls were distributed to the audience by the five members. After warmly thanking and greeting fans goodbye, the boys announced they were working on a new album! This means we’ll see the group very soon with new songs and new styles!

Meanwhile, the SHINee World Tour II will be making a stop in Taiwan on September, 15th and 16th and in Singapore on December, 8th!