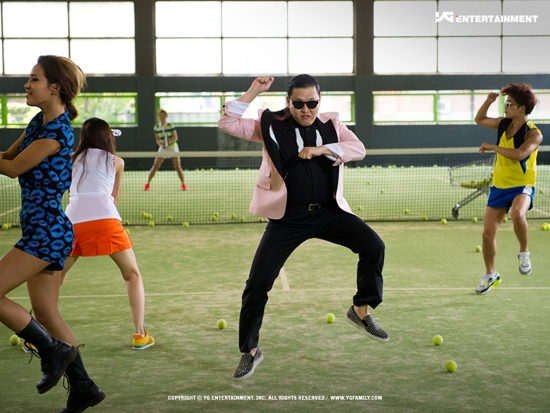 Psy’s latest MV “Gangnam Style” has been all over the Web today, getting mentions by T-Pain, Robbie Williams, Josh Groban, and the popular blog site Gawker.

The video was first published on the U.S. blog site Gawker under the title, “Did This Underground Hip Hop Artist from South Korea Just Release the Best Music Video of the Year?” The article quickly went viral online, getting more than 5,800 Facebook likes and over 180 comments.

Soon after, the British popera singer Josh Groban tweeted his admiration for Psy, saying, “It’s a Gangnam Style world, we’re just living in it. Amazing video.” His tweet led to another Twitter message by British singer Robbie Williams, who praised the video, “P.S. TRY WATCHING THIS AND NOT SMILING I DARE YOU…(NOT EVEN A LIP CURL).”

Later in the day, U.S. rapper T-Pain also joined the Psy bandwagon, as he wrote on his Twitter, “Words cannot even describe how amazing this video is…”

After the unexpected attention was brought on to this video, YG Entertainment, Psy’s agency, quickly addressed the press and said they did not reach out to any of these artists prior to the tweets, as some Korean agencies are often suspected of using personal connections to make Western artists mention their singers for publicity purposes.

In case you missed it, make sure you watch Psy’s “Gangnam Style” MV below!