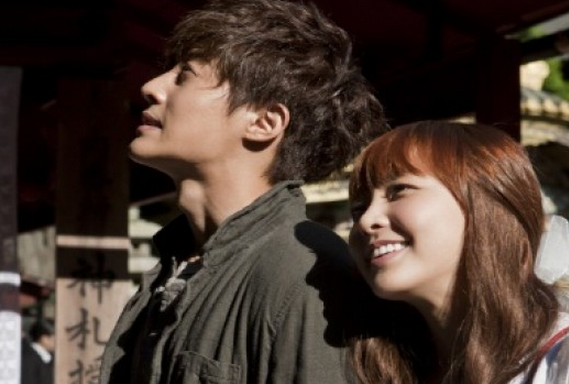 Earlier today, a romantic still of Kim Hyun Joong giving a back hug to Jung Yumi for upcoming drama “City Conquest” was released. As shown in the picture, Kim Hyun Joong hugs Jung Yumi and smiles gently, while she lightly leans on his right arm. With long wavy hair, Jung Yumi displayed her innocent and delicate beauty, different from her most recent antagonistic role in “Rooftop Prince,” which also starred JYJ’s Park Yoo Chun and Han Ji Min.

Netizens that have come across the picture commented, “They look like a real couple. They look so good together,” “Why am I so envious of Jung Yumi,” and “I want to see ‘City Conquest’ quickly.”

“City Conquest” has been busy filming in Japan since early July. The cast and crew are currently are filming in South Korea. Based on a Korean comic book, the story is about a man named Baek Mir (Kim Hyun Joong), who fights the corrupted society that destroyed his family.

The drama has yet to find a broadcasting station and time-slot to air the series but aims to air by the end of 2012.