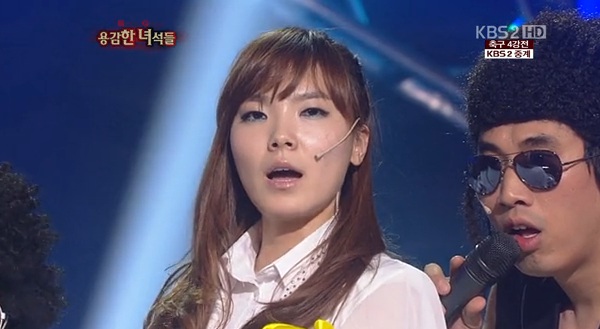 On August 5, Shin Bo Ra appeared on the weekly “Brave Brothers” segment with her rapping crew. Her dig for this week was aimed at all idol singers, as she started off, “All the idols, listen up. As all popularity comes with a certain level of responsibility, there’s something that you guys need to remember.”

“Kids imitate your fashion, sing along your songs, AND they even follow your wrong behaviors too. Remember – idols are, as it says, the role models of our children,” she said as the crowd applauded her for bringing up a sensitive issue.

Although, Shin Bo Ra didn’t directly mention the names of T-ara or Nichkhun, netizens interpreted her words as being criticism towards the two idol singers, as the two artists constantly made headlines over the last couple weeks with controversial issues. 2PM’s Nichkhun was involved in a drunk driving incident, where he crashed into a motorcyclist while driving under the influence. T-ara allegedly bullied their ex-member Hwayoung, who was later forced to drop out of the team.

Netizens commented, “This is why we love the ‘Brave Brothers,’” “Shin Bo Ra is hot,” and “I hope T-ara learns from this mistake.”

You can watch the full clip of the skit here!