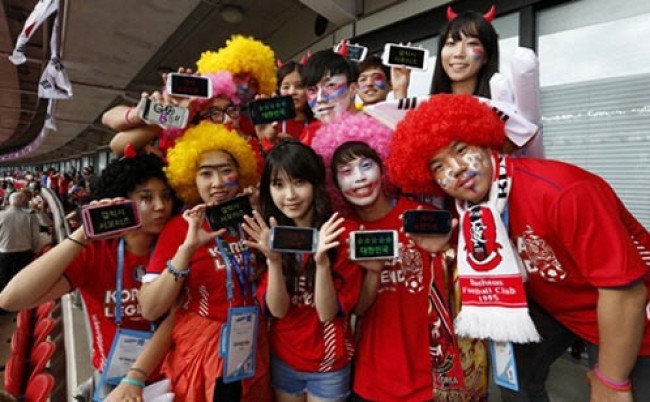 The most recent episode of SBS “Good Morning” showed IU cheering for Korea’s national soccer team playing against Great Britain at the 2012 London Olympics‘ quarterfinal match. IU was dressed in a Red Devil outfit with a small red devil horn headband as the final touch.

IU commented, “I’ve never cheered with other people like this before. I was unaware of this great atmosphere in stadiums because I always watched national soccer games on TV at home. Watching it here with other people is 100 times more exciting.” She added, “I think I’m gonna leave the stadium with hoarse voice after the game.” After the game, she also posted on twitter, “Daebak! This is crazy! Korea rocks, for real!” fully expressing her love and support for the Korean national soccer team in making it to the semifinal round in the Olympics.

Meanwhile in London 2012 Olympics soccer tournament, South Korea beat Great Britain five to four in the penalty shoot-out in the quarterfinal game on August 4. They will be playing against Brazil in the semifinal round.

IU
2012 London Olympics
Red Devil
How does this article make you feel?