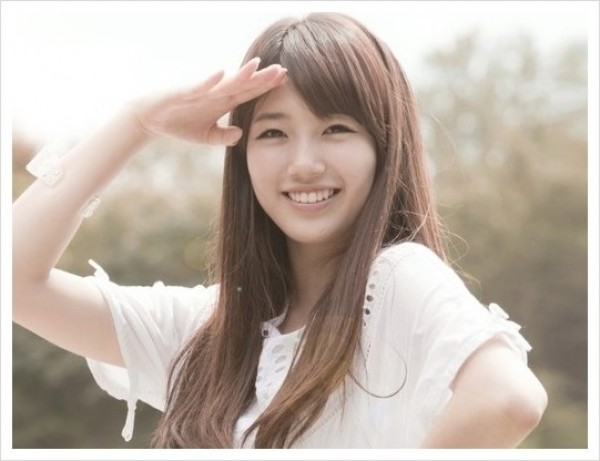 On the most recent episode of KBS “Invincible Youth 2,” Muhak Girls’ High School Handball Team from Masan, Gyeongsangnam-do appeared on the show and went on a fun field trip with G6 members. Kim Shin Young and Suzy got on the same bus with the handball team as tour guides.

Kim Shin Young said on the bus, “Everyone on this bus is from Gyeongsang-do, except for Suzy. When in Rome, you have to do as the Romans do. So Suzy must start using Gyeongsang-do dialect.” Upon Kim Shin Young’s suggestion, Suzy confidently responded, “I’m really good with dialects!” and immediately started speaking in Gyeongsan-do dialect.

Also during their bus ride together, one of the Muhak girls asked Suzy, “Do you have a boyfriend?” At first, Suzy bashfully denied having a boyfriend. However, she soon changed her answer and showed the background picture on her phone, claiming that it’s a picture of her boyfriend. The revealed picture was of Hollywood actor Ian Somerhalder from popular TV show “Vampire Diary.” When Kim Shin Young and the Muhak girls started teasing Suzy about her boyfriend, who turned out to be just a celebrity crush, Suzy covered her blushing cheeks with hands.

Netizens commented on Suzy’s celebrity crush, “You just almost gave all the uncle fans a heart attack,” “Suzy, you almost got me,” and “so when is she going to reveal her real boyfriend?”