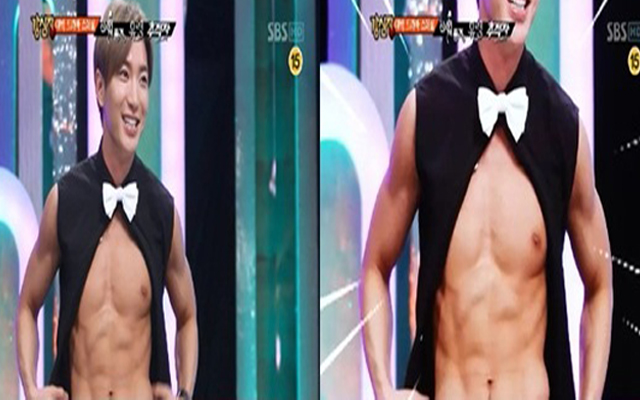 On the August 14 broadcast of SBS “Strong Heart,” the Super Junior member showed off his abs on the “2012 Hit Dramas” special episode in front of actors from “Ghost,” “A Gentleman’s Dignity,” “I’ll Give You the Stars and the Moon” and “An Angel’s Choice” among others.

Actress Kim Jung Nan who plays the Countess in KBS “Bridal Mask” expressed her disappointment for not seeing idols on “Strong Heart.” She caused laughter in the studio as she said,” “When you appear on “Strong Heart” you expect to see SHINee, CNBLUE, Big Bang. I had my hopes high but besides Jang Hyun Sung, there’s no one.”

Leeteuk then got up and said that he had prepared a present for the actresses present. Upon seeing Leeteuk’s well build body Kim Jung Nan couldn’t hide her surprised look.