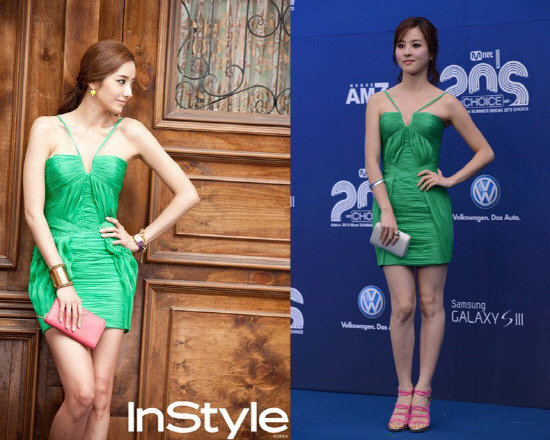 Han Chae Young vs. Han Hye Jin: who does this round of fashion face-off belong to?

Actress Han Chae Young was featured in August 15th’s “In Style” magazine wearing a simple yet unique halter dress. The vivid green short dress makes a bold statement and is very fitting for the summer season. Han Chae Young paired the dress with silver earrings, a metal cuff bracelet and a pink clutch.

Wearing it first was actress Han Hye Jin, who wore the bold green dress on June 28 to the 2012 Mnet 20’s Choice show. She also received favorable comments about her style, with the public calling her a “forest goddess.” She accented her outfit with silver jewelry and a silver clutch – although simple, she exuded style and grace.

Netizens commented on the fashion face-off: “It’s the same dress but looks so different! Han Chae Young looks sexy while Han Hye Jin looks youthful and elegant,” “Whatever Han Chae Young wears looks sexy and beautiful on her,” and, “The dress looks great on both Han Chae Young and Han Hye Jin. The most important finishing point of an outfit is really the face!”

Han Chae Young
Han Hye Jin
How does this article make you feel?