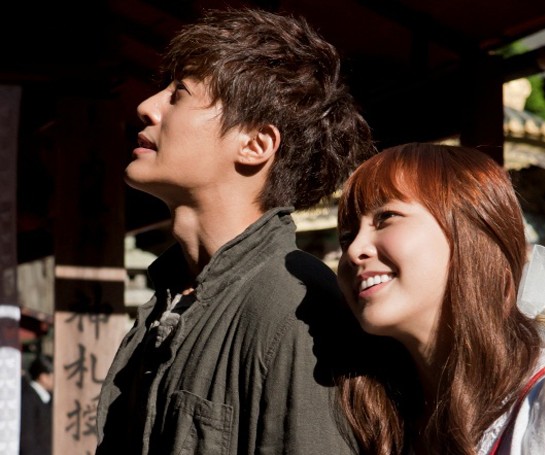 More stills from the upcoming drama, “City Conquest” starring Kim Hyun Joong and Jung Yoo Mi, have been revealed. The stills are from a scene where the characters are drinking and having fun.

The stills show Kim Hyun Joong and Jung Yoo Mi, who play lovers in the drama, and also Park Hyo Joon, who plays the role of Kim Hyun Joong’s best friend. The three of them are captured having a good time on the streets of Japan. The stills capture feel-good emotions of love and friendship.

The staff reported that this scene was done with perfect chemistry by the three actors and that it gave them much laughter and strengthened their trust in the cast. Park Hyo Joon’s comic drunken act and ad-libs were said to create a sea of laughter throughout the set.

Netizens commented, “I could tell how strong their love and friendship are just by looking at these pictures,” “The three of them look so close,” “I’m getting happy just by looking at this,” “I really want to watch ‘City Conquest’ asap,” “Are they drinking and singing?” and more.