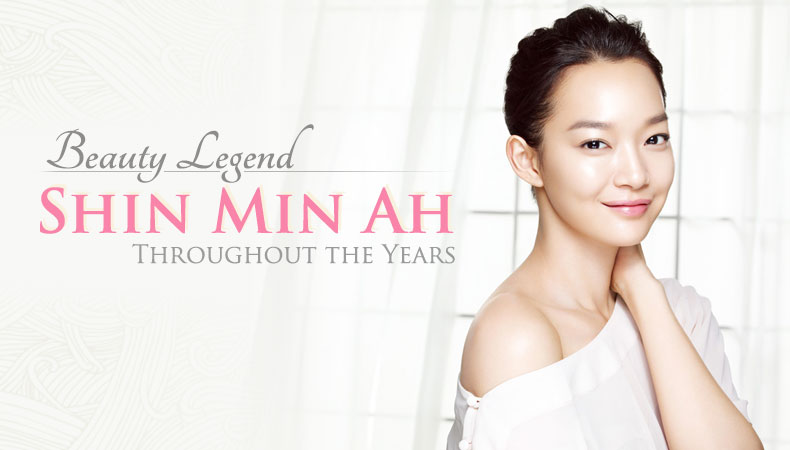 [Ceci] A Beauty Legend: Shin Min Ah Throughout the Years

There are many actresses who’ve began their careers as models. However, Shin Min Ah has matured into a fashion icon who’s even recognized in the beauty industry. She’s not your typical beauty, but her unique combination of lovable and sexy charms makes her completely irresistible. While her big round eyes, cute dimples, and soft lips make her look like a young girl, her slim waist, curvy hips, and slim ankles emphasize her feminine appeal.

Park Sung Min, a representative of HERA cosmetics, a brand Shin Min Ah endorses, described, “She’s an everlasting icon who receives much love from men. She’s also someone every women in their twenties most want to resemble. Many actresses who’ve been in the industry are normally confined to a certain image. However, Shin Min Ah is a very versatile model who can change her image through makeup.”

Shin Min Ah’s been in the industry since she was in middle school. As such, she knows exactly what to do in front of the camera in order to get a perfect cut. Kim Hyo Sun, manager of the PR team at miss en scene, also a hair care brand the actressendorses, stated “Shin Min Ah actively presents her own opinion during shoots. She would ask how her hairstyle is or whether her makeup needs to be fixed. Recently, she shot a CF for a perfect serum product, and we had specialists from Thailand come in to create certain illusions. During the filming, it was important that the model work and pose in a certain way to create the illusion of a flowy, wavy hairstyle. It was a difficult shoot, but Shin Min Ah completed it like a professional. She surprises us every time with her efforts.”

It’s easy for anyone to get bored because we’ve seen her for so long. However, Shin Min Ah has been able to catch everyone off-guard with her ability to go from cute and adorable to chic and sexy.

2000: Since the late 90s, Shin Min Ah, Gong Hyo Jin, Kim Min Hee, and others were some of the top models to decorate the fashion magazines in Korea. Shin Min Ah debuted in 1998 after winning a competition, becoming an exclusive model for “KiKi” magazine.

2004: She debuted as a model in middle school and started acting in high school. She emphasized her youthful beauty by barely wearing makeup, creating a lovable image through her natural complexion and soft lips.

2007: She made a name for herself as an actress with her role in drama “The Devil,” co-starring Joo Ji Hoon and Uhm Tae Woong. She replaced her little girl image with one that was more mature and feminine. Rather than adding more color to her makeup, she emphasized her beautiful eyes and clear skin.

2009: Shin Min Ah at the press conference for movie “A Million.”

2009: In order to get into character for her role as the innocent and freewheeling Ahn Morae, Shin Min Ah cut her long locks. Her short hair was still long enough to be styled in many ways, including an upstyle.

2011: Throughout the run of “My Girlfriend Is a Gumiho,” Shin Min Ah looked great in nothing but a white summer dress and messy loose hair. Her stylist revealed that Shin Min Ah looks best when she looks natural.

2012: Since 2009, Shin Min Ah has been the endorsement model for mise en scene. She’s shown her ability to adapt to various hairstyles – ranging from short cuts to long wavy hair.

2012: Shin Min Ah takes on another fantasy character in “Arang and the Magistrate.” For Arang, she stayed away from colorful palettes, opting to go for au natural. As such, many viewers and fans were able to notice her smooth and soft complexion.

Hera
My Girlfriend is a Gumiho
Shin Min Ah
The Devil
Arang and the Magistrate
Ceci-Soompi
mise en scene
The Naked Kitchen
miscellaneous
How does this article make you feel?