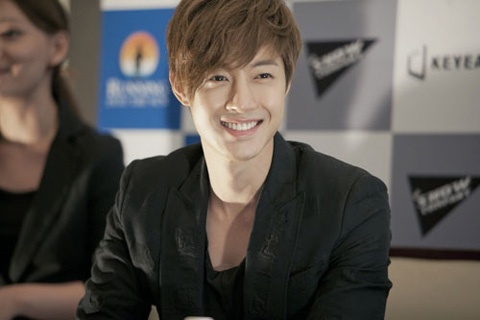 “City Conquest” is an upcoming drama based on a comic with the same title. The production team for this drama is the same as the one from “Athena: Goddess of War.” It is being filmed in various locations such as the US, Japan, China and more.

The scene in this still was filmed on July in Japan. The still captures Baek Mir’s passionate love for his woman, Lee Dan Bi (played by Jung Yoo Mi).

According to Key East Entertainment, Kim Hyun Joong showed great acting skills. His moist eyes and his detailed emotional acting especially stood out. It is reported that this scene also proved the great chemistry between Kim Hyun Joong and Jung Yoo Mi.

Kim Hyun Joong will shed his past, soft image. Baek Mir is a strong young man who struggles with the loss of both parents and had a rough upbringing. But he transforms into a weak man in front of love.