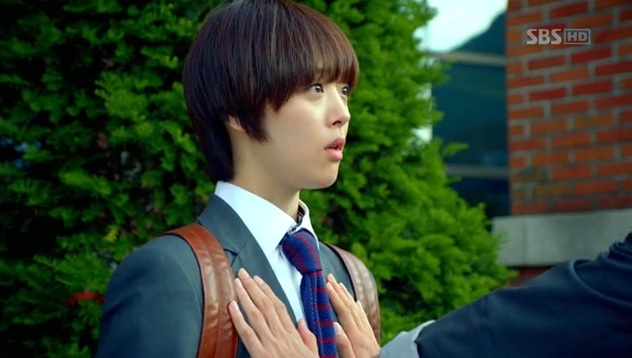 Lee Hyun Woo revealed that he was criticized by his friends for grabbing f(x) Sulli’s breasts on SBS “To the Beautiful You.”

On August 27, Lee Hyun Woo attended the mid-season press conference for “To the Beautiful You.” One of the biggest questions he received was regarding the scene where he grabs Sulli’s breasts. “There’s a scene where I touch Sulli’s breasts in the first episode. It was a really embarrassing and uncomfortable experience,” Lee Hyun Woo explained of the situation.

“It was really embarrassing when he shot the scene, but Sulli did a good job leading me so I was able to film it with ease. I think that’s why the drama as a whole looks more fun,” he said.

But he continued, “After the episode aired, I received a lot of calls from my friends. Most of them were envious and told me how fortunate I was to film that scene. But some of my friends criticized me and even cursed at me.”

In the first episode of “To the Beautiful You,” Lee Hyun Woo gives a tour of the school while taking her to the dorm. During their conversation, Lee Hyun Woo notices a difference in Sulli’s physical appearance and tells her that she looks slightly different from others. Out of nowhere, he places both of his hands on her breasts, asking why they’re so soft, but discovers they are actually “hard” in the middle.

“To the Beautiful You” is a romantic comedy that stars f(x)’s Sulli as a male-disguised Goo Jae Hee. It was has SHINee’s Minho, Lee Hyun Woo, Kim Ji Won, and Seo Jun Young on its cast.

(You can watch the scene here!)

f(x)
Lee Hyun Woo
Sulli
KPLG
To the Beautiful You
How does this article make you feel?