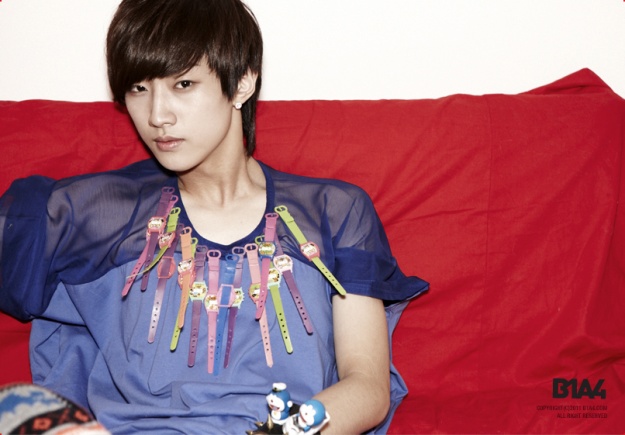 B1A4’s Jinyoung to Make a Cameo in “The Thousandth Man”

Idol group B1A4‘s leader Jinyoung has made a cameo in the sitcom, “The Thousandth Man.”

On August 29, MBC announced, “On the third episode of ‘The Thousandth Man,’ which will air on August 31, Jinyoung will make an appearance. He will play the role of Min Kyu, who is a young man going through the pain of his first love.”

Jinyoung’s character Min Kyu, is the man who Mi Jin (played by Kang Ye Won) loved back in the eighties. He is plain but a great dreamer. But his relationship with Mi Jin ends badly over a small misunderstanding. After 27 years have passed, Min Kyu (then played by Jo Duk Hyun) has become a man in his late-forties, who has lost his dreams and lives as a lonely father.

In order to portray the young Min Kyu in the eighties, Jinyoung changed his hairstyle and sported big framed glasses. Despite it being his first attempt at acting, staff members praised Jinyoung for his perfect execution of a shy young man in love.

After the previews were released, netizens commented, “I can’t wait for a black-haired Jinyoung,” “I thought he was only good at singing but I guess not… I better watch this in real-time,” and more.

This episode with Jinyoung’s cameo is set in the eighties so viewers can expect to hear many sentimental songs that bring about happy and nostalgic memories.

Meanwhile, B1A4’s “Hey Girl” track for the OST of “The Thousandth Man” is receiving a lot of love.

B1A4
KPLG
The Thousandth Man
Jinyoung (B1A4)
How does this article make you feel?