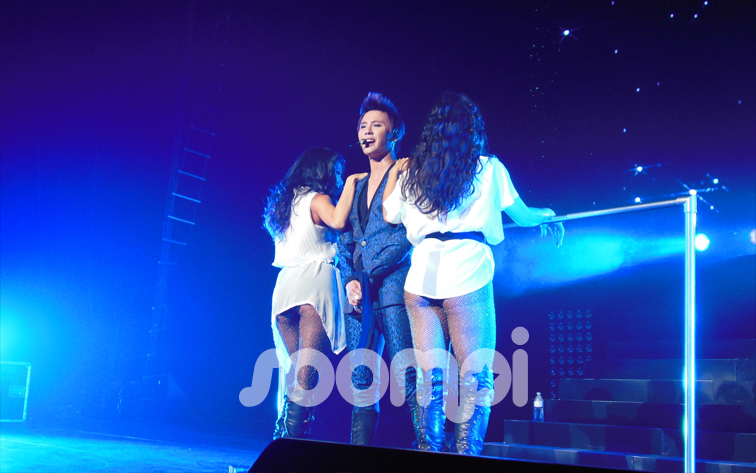 Eight years after debut, JYJ’s XIA Junsu was finally able to stand on his own solo stage at the Hammerstein Ballroom in New York on the first stop of his World Tour. Having just previously completed a 6-city Asia-tour in countries including Thailand, Taiwan, Indonesia, Shanghai, and Hong Kong, XIA combined his powerhouse vocals and impeccable stage presence in order to treat his US fans to an unforgettable show as a celebration of the release of his first solo album “Tarantallegra.”

Be sure to check out Soompi’s exclusive coverage of the New York stop of XIA Junsu’s tour below!

Long before the start of the concert, screams of anticipation had already filled the Hammerstein as each teaser (and nearer the beginning of the concert, the music video for Tarantallegra) was broadcasted on the screens on both sides of the venue. Red glowsticks were thrusted through the air in rhythm, and excited fans chanted “Junsu” over and over.

Suddenly, the lights dimmed, and fans knew it was time. The beats of “Breath”, the new track on XIA’s first solo album “Tarantallegra,” pounded through the Hammerstein, and was met with even louder screams from the fans. XIA Junsu rose, king-like, from a platform below the stage, and proceeded directly into the choreography, each movement perfectly accessorizing each beat of the song.

Without pause, Junsu proceeded into the more sensuous songs on his new album, capturing the audience’s hearts with “No Gain,” “Lullaby,” “Intoxication” and “Set Me Free,” all accompanied by feverish, suggestive dances with his female backup dancers. During “Intoxication,” a three-way mirror was brought onto stage, which served as a great prop to visually multiply and enhance Junsu’s stage presence, as well as the intensity of the song.

Junsu finally formally introduced himself, and promised the audience that he would grant three wishes (he named this “Genie-time!”). The first wish came from a fan who wanted Junsu to personally sing to her, and Junsu immediately complied by giving an a capella rendition of Whitney Houston’s “Greatest Love Of All,” a song which he revealed that he has been singing since grade school. The second wish request had Junsu pacing around the stage in embarrassment; after a long pause (and a request for all the male audience to “keep their eyes closed”), Junsu brought out his infamous “Angel Xia” pose, before cutely laughing it off. Of course, the audience couldn’t be satisfied without asking Junsu to show off his sexy poses, and for the third wish Junsu did a quick butt-shake at the audience, arousing more screams from the fans.

The concert slowed down its pace as Junsu began to sing ballads such as “You Are So Beautiful” from the “Scent of a Woman” soundtrack, and “Though I Already Know” and “Around and Around” from his new album. His enticing vocals swept through the Hammerstein, and the audience listened, captivated, as Junsu poured his heart and emotions into the songs.

In order to give time for a costume change, Junsu’s backup dancers bounced on stage, and began a dance-off to a remix version of JYJ’s “Be My Girl.” Soon after, Junsu treated the audience to a few songs from his musicals, Mozart and Elisabeth, including “The Last Dance,” “I Am, I Am Music,” and “Why Don’t You Love Me,” proving once again the wide range and control of his voice.

As the familiar beats of “Tarantallegra” echoed through the Hammerstein, Junsu emerged from center stage via a movable platform, and crisply delivered the memorable choreography and vocals to an English version (this version was released on his latest album as the oriental version). Unfazed by the cheers and screams of the fans, Junsu slowly made his way back center stage towards the end of the song, and calmly sat down on the throne that had risen up from backstage, carefully surveying the scene before him. He remained in this position, music-less, with only the chanting of the fans in the background, for a few minutes, until the start of “Fever.” A short pause followed the end of the song, and Junsu retreated briefly backstage while the music video of “Uncommitted” appeared on the screens. Soon after, Junsu took the stage to perform an English version of “Uncommitted;” this marked the first time that Junsu had sang “Uncommitted” live.

The end of the concert was fast approaching, and Junsu’s performances of “I Don’t Like Love” and “Dew-Laden Tree” were the last exhibitions of his powerful vocals. Prior to the concert, a fan group had organized a light stick event for the last song “Dew-Laden Tree,” and a sea of white lightsticks could be seen throughout the ballroom as soon as the song started. The final note of the final song sounded, and Junsu soon retreated backstage, marking the end of the concert.

But it was not over yet. The still-excited crowd repeatedly chanted “Encore” “Encore” “Encore,” and Junsu made a final appearance on stage to sing JYJ’s “Fallen Leaves.” There were no props, no backup dancers, just Junsu and his voice. Junsu prompted the audience to sing the last line of the song “start over again,” and with that, the concert came to an official close.

Junsu is scheduled to perform in LA, California on September 2, Mexico on September 6, Brazil on September 8, and Chile on September 10 as part of his first solo World Tour. If you have the chance, be sure to catch him perform live!