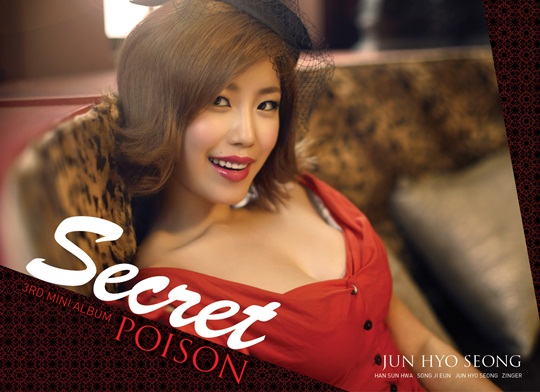 Hyosung from girl group Secret has cut her hair for their new comeback!

TS Entertainment, the company managing Secret, is starting to rev up promotions by first releasing the leader’s photo teaser on September 3. It is included in the album jacket.

The title track of their upcoming mini-album is “Poison” and will be released on September 13. They are planning to release a photo teaser for the next couple days.

She easily captivates with her flaming red dress and sultry red lips formed in a teasing smile. Her slimmed cheeks and jawline in contrast to her voluptuous body is catching the attention of many fans.

They last released the song “Love is Move” in October of last year. This will mark their return after 12 months. “Poison” is written by hitmaker duo Kang Ji Won and Kim Ki Bum who also penned Secret’s other hits “Magic,” “Madonna,” “Shy Boy,” and “Starlight Moonlight.”

Hyosung
Secret
KPLG
Poison
How does this article make you feel?