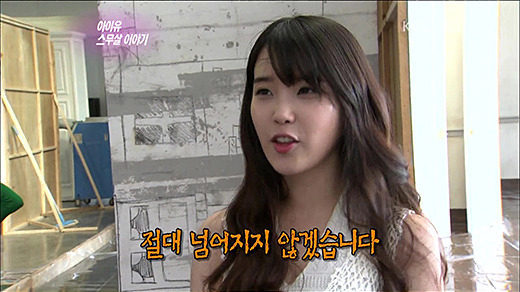 IU Slips Up During CF Filming

On KBS “Entertainment Relay,” IU introduced herself filming for a CF.

The scene she’s filming requires her to run on a wet floor barefoot. As he was observing behind the scenes, a reporter for “Entertainment Relay” commented, “Can you watch her fall?” and quickly added, “I bet she will not fall” trying to use his psychic powers to prevent such a possibility.

But unfortunately, IU did fall on the ground with a loud splash. She often falls at award shows and on stage earning her an endearing nickname “Kkwa-dang IU.” (Side note: Kkwa-dang is a slang describing someone who falls often)

She also revealed on the show that her ideal type is none other than Big Bang’s Taeyang. She declared, “It’s always been Taeyang. He’s in my heart.”

Is it because she’s not afraid to show her mistakes that she’s so loved by the public? Or her awesome singing skills?

IU
Entertainment Relay
Taeyang
KPLG
How does this article make you feel?