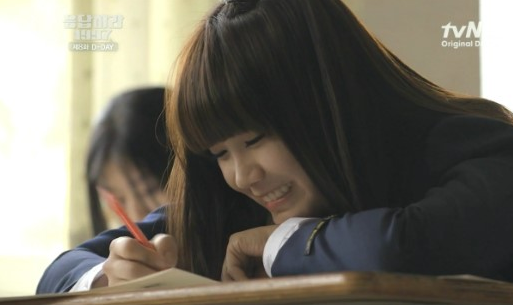 The tvN drama “Answer Me 1997,” in which Jung Eun Ji and Seo In Gook star, premiered with little fanfare but has steadily gained a growing base of enthusiastic followers who are dying to know whether Jung Eun Ji’s character Sung Si Won ends up with Seo In Gook’s character Yoon Yoon Jae.

Below are selected excerpts from the interview.

On the drama “Answer Me 1997” becoming a hit, Jung Eun Ji said: “After the first broadcasted episode, I kept searching [on the Internet], and my feelings went up and down. I thought I would be criticized or teased, people saying that I acted terribly, but, I am completely proud.”

On being like her character, Jung Eun Ji said: ‘Like Si Won, I’m unaffected and boyish. I have plenty of male hormones.”

On becoming a singer, Jung Eun Ji said: “Because my mom was opposed to me becoming a singer, during high school, for a moment I thought about, other than singing, a different job. I really liked criminal movies, and when on the new, something bad happened, I had a temperament that would get furious, so I thought maybe I could become a detective or investigator. But, in my heart, it was always only singing, singing, singing. On December 27, 2009, it was resolved that I would be a singer for the rest of my life….On that date, I went out to a singing competition and got first place, and I had my first taste. It’s not that it is good that I got first place, but it was an amazing the feeling of breathing, with the audience, on stage. After that, I tried to persuade my mom for a half a year. Finally, on July 24, 2010, after receiving her permission, I enrolled in a preparation school.”

On something she would like to do as an adult, Jung Eun Ji said: “CC, campus couple. I have imagined many times what it would be like, holding hands with a boyfriend, crossing and going around campus. But, right now, even not being chased out of a noraebang because it is past ten is good.”

Apink
CeCi
Jung Eun Ji
KPLG
Answer Me 1997
How does this article make you feel?