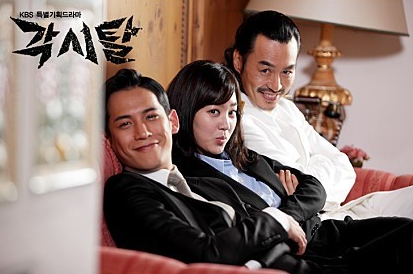 On September 3, actor Yoon Jin Ho posted the photograph of the actors on his Twitter account with the following words: “Kimura squad, mobilize!”

The photograph shows the five actors posing in comical poses some with serious expressions and others smiling. In the drama, Yoon Jin Ho plays the lower officer Koiso Tadanabu who delights in Joo Won’s character Lee Kang To’s trials and tribulations and was shocked to discover Lee Kang To’s alter ego was Bridal Mask. Yoon Bong Gil plays the part of junior officer Abe Shinji who performs his duties while finding his conscience pricked by the pain of the citizens and is loyal to Lee Kang To. Park Ki Woong plays the part of officer Kimura Shunji who became part of the police force to turn his father’s focus away from his love interest Oh Mok Dan, in part to avenge his brother, but found himself becoming dehumanized and cruel in the process.

Drama “Bridal Mask” has been the number one drama this summer in the Wednesday-Thursday drama category and is heading into its final installment this week. The last episodes will be aired this week.