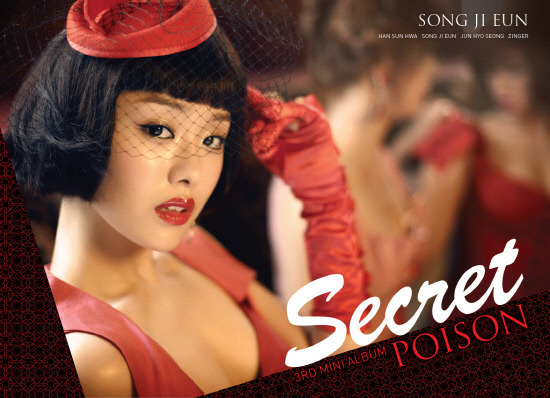 On September 4, TS Entertainment has released a photo teaser of Secret’s second member for the upcoming mini-album “Poison.” It is none other than Song Ji Eun, who is known as their lead vocalist.

She has made a drastic change, cutting off her long beautiful locks. The short hair seems to be influenced by the character Matilda (played by Natalie Portman) in the movie, “The Professional.” Her smooth red outfit and Kate Middleton-inspired hair piece solidifies the “Poison” look and her dreamy expression and magical eyes are melting the hearts of male fans. She has previously taken advantage of her youthful face, but has now tapped into her sexiness for an amazing transformation.

The stylist in charge of Secret, Lee Eun Ah explained, “For Secret’s comeback, I drew on the influence 1940s England with a feminine look. I chose vivid colors that exude elegance and sexiness for the outfits and used the best accessories and hair pieces to complete the ensemble.”

Yesterday, a teaser of Jeon Hyo Sung was revealed and it caused a lot of online chatter. Have you already taken a look?

Secret
Song Ji Eun
KPLG
Poison
How does this article make you feel?