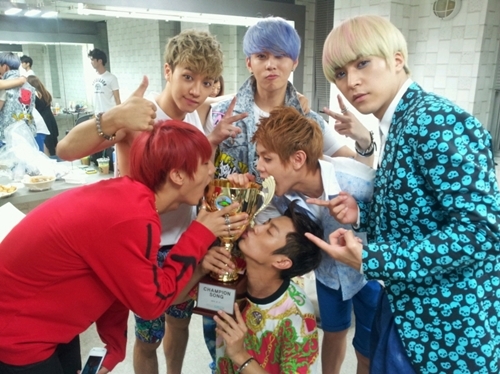 On September 3, BEAST member Dongwoon posted the photograph of the members on his Twitter account with the following words: “Here’s a group shot in commemoration of Hyunseung’s birthday! H.B!”

In the photograph, the boys are seen posing one after another on a staircase with each idol having a different hair color and style.

Netizens who viewed the photograph responded: “With each person clustered here and there, everyone is cute,” “Hair colors, and even expressions, each are separate,” “BEAST is the trend these days, “Doojoon doesn’t seem like being in the very front,” “Hyunseung is the cutest.”

Earlier this summer, BEAST made their comeback with a mini album “Midnight Sun“ and promoted new single “Beautiful Night.” They recently finished promotions for the single.