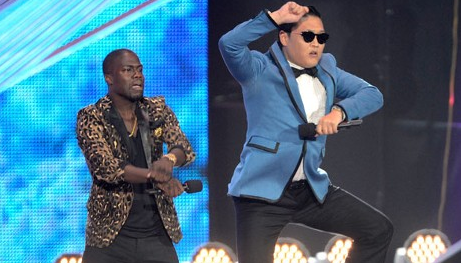 Along with MTV VMA host Kevin Hart, Psy appeared on stage in a short skit in the show which was viewed by over 600 million households around the world through MTV’s network of over 60 channels and syndication.

The two appear on stage dancing the horse dance to “Gangnam Style” being played through the Staples Center.

Kevin turns to Psy and says: “Psy. Dude, you’ve got over a 100 million views on YouTube right now for “Gangnam Style.” Dude, how does that feel? Talk to me, Psy.”

Psy responds in Korean: “I feel so good. I’m really happy. I wanted to speak in Korea just once on this stage. It’s amazing, right?”

Kevin pretending to understand responds: “Me too Psy.”

Psy asks in English: “You know what I’m talking about Kevin.”

Kevin: “Why the hell didn’t you say it in English the first time? Music! I want to do it again!”

The camera pans back to Katy Perry smiling and doing the dance in her seat, while Rihanna looks confused.

The two exit the stage dancing the horse dance as “Gangnam Style” once again plays.