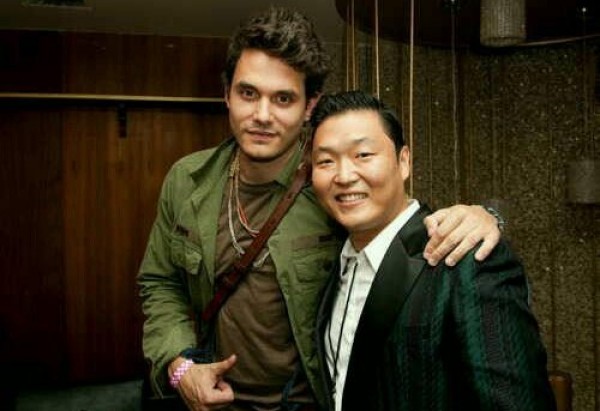 On September 7, YG Entertainment‘s official twitter uploaded a picture of Psy with world-renowned singer-songwriter John Mayer and commented, “Psy at MTV VMA Pre-Party with John Mayer.” The uploaded picture shows John Mayer and Psy posing together for the camera and then doing the “horse-riding dance” together.

John Mayer is not the first Hollywood star to be fascinated by Psy and his dance. Previously, many other Hollywood celebrities like Tom Cruise, Anne Hathaway, and Britney Spears also have shown much support and interested in “Gangnam Style“s horse-riding dance.

This year, Psy had been invited to MTV VMA as a special guest. He is the second Korean artist to be invited to this event (Rain was the first in 2005). He showcased his now worldly famous horse-riding dance on the red carpet, pre-party stage, and when he came on stage as a presenter.

Meanwhile, Psy recently signed exclusive contracts with Justin Bieber‘s manager Scooter Bruan‘s SB Project for management and Universal Republic Records for international distribution of his records in the world except for Korea and Japan.