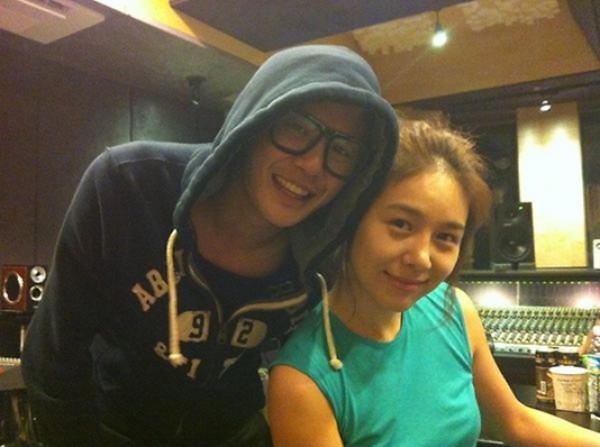 On September 5, Ok Joo Hyun posted on her twitter, “Finally uploading this picture @Recording studio” and added a photo to this comment. The revealed photo is of herself and JYJ‘s Junsu in a recording studio. It seems like the picture was taken from when the two got together to conduct a studio recording session of musical theater production “Elizabeth“s soundtrack.

The picture shows natural, down-to-earth, and a little tired looking Junsu and Ok Joo Hyun smiling at the camera. Junsu is wearing a pair of thick-rimmed black glasses and a zip-up hoodie. Next to him is Ok Joo Hyun with no makeup on, looking plain and comfortable with her hair tied back in a green sleeveless t-shirt.

Netizens commented, “Junsu looks exhausted and haggard and yet, so masculine,” and “I’m really looking forward to your next album!” Meanwhile, Junsu is in the middle of his world tour concert series now. He will be performing in Mexico City, Mexico on September 7 and then move onto Sao Paulo, Brazil, and Santiago, Chile. After a series of concerts in South America, he plans on visiting Europe in October.

Junsu
JYJ
Elizabeth
Ok Joo Hyun
How does this article make you feel?