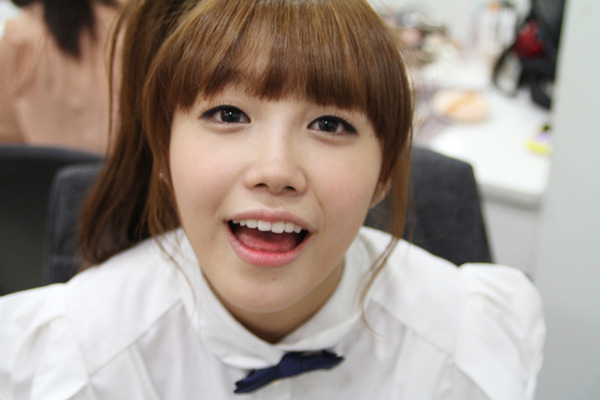 On the most recent episode of TrendE “A Pink News Season 3,” Eunji proved herself as famous rabbit character Mashimaro‘s look-alike. During this episode, Eunji was given a camera to film herself for “S Line Project.” She struggled with the awkwardness of having to talk to the camera directly by herself. She said, “I don’t know what to say since this is my first time filming myself.”

To cover up her shyness and awkwardness, Eunji stretched out her eyes to the sides and put air in her cheeks to look like Mashimaro. Her drooping eyes, adamantly sealed lips, and plump cheeks bring out a remarkable resemblance to the bunny character. Netizens commented, “I thought Eunji was all about being cool and boyish, but she is so cute,” “What a cutie,” “I can’t tell which one’s Eunji and which one’s Mashimaro,” and “Oh my god, so cute!”

Meanwhile, “A Pink News,” a reality TV program feature A Pink, started broadcasting back in March 2011 and the show is currently in its third season. The show airs every Friday at 8:30pm KST on TrendE channel.

Apink
Eunji
A-Pink News
Mashimaro
How does this article make you feel?