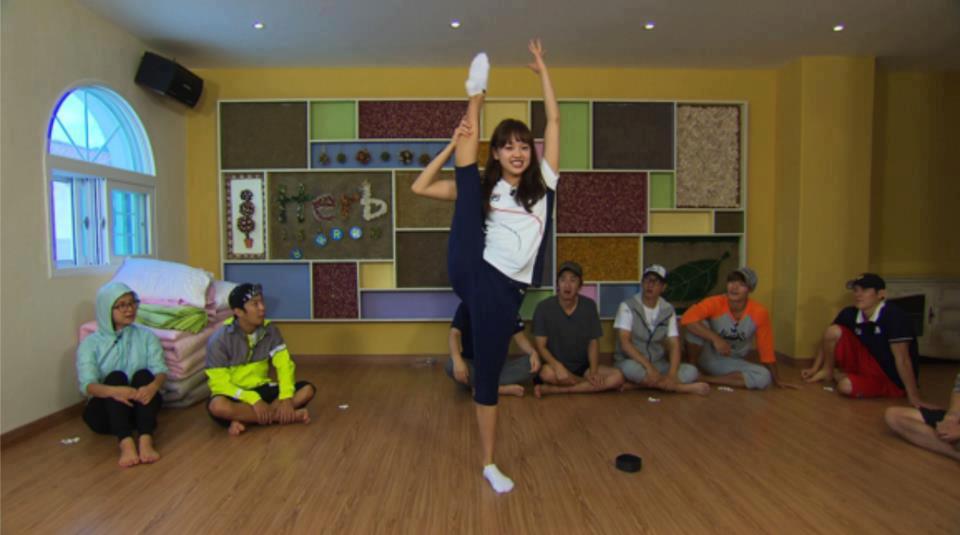 Son Yeon Jae is the most recent guest to appear on SBS’s “Running Man.” Who is she? She is not a Kpop star, but she has just recently caught the hearts of the Korean media and public. Crowned as a “nation’s fairy,” she had many families glued to the tv screen when it was her chance to perform her rhythmic gymnastics routines. Although she placed 5th at the London Olympics, she became the first Korean rhythmic gymnast to qualify and reach the All-around Finals at the games.

On September 11, a staff from “Running Man” posted a picture through their official facebook page with the caption “‘Running Man,’ Park Tae Hwan and Son Yeon Jae shocked by the brutal chase?”

The picture released shows otherwise. The filming atmosphere looks great with everyone full of smiles. Son Yeon Jae was able to display a variety of her talents during the program. Wearing a pink sponsored shirt, she showed off her cute charms while “marine boy” Park Tae Hwan also showed he had a great time filming the episode.

The netizens expressed their adoration with comments like “She has more charm the more I look at her,” “Son Yeon Jae is like a doll,” “Her smiles are really lovely.”

Soompiers, have you watched this particular episode? Any funny or memorable moments?