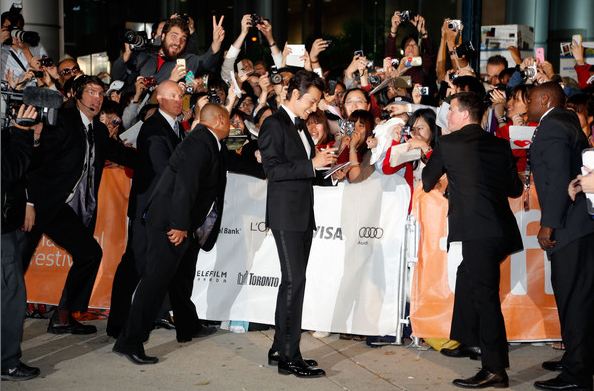 Lainey Liu of LaineyGossip.com and reporter for CTV’s ETALK reports for The Globe and Mail that despite international stars such as George Clooney, Brad Pitt, and Ben Affleck coming through Toronto for the 2012 Toronto International Film Festival, “…in all my years covering TIFF I have never seen them [fans] almost crash the gates.”

But, for Jang Dong Gun on the red carpet of the screening of his film “Dangerous Liaisons,” fans went crazy.

Lainey Liu writes that the gates started to wobble and that security had to hold the fans back, and commented that K-pop must be taking over after seeing Jang Dong Gun cause the most fan furor at the 2012 Toronto International Film Festival just after Psy became the talk of the 2012 MTV Video Music Awards.

The film “Dangerous Liaisons” is an adaptation of the French novel of the same title, and is set in glamorous Shanghai in the 1930s. Jang Dong Gun plays the role of Xie Yifan who is a rich playboy who engages in a wager with social butterfly Mo Jieyu who is played Cecilia Cheung. At a social event, Mo Jieyu, in the past content with flirting but never giving in to his charms, offers to give herself to him if he is able to seduce the 16-year old fiancée Beibei of her former lover.