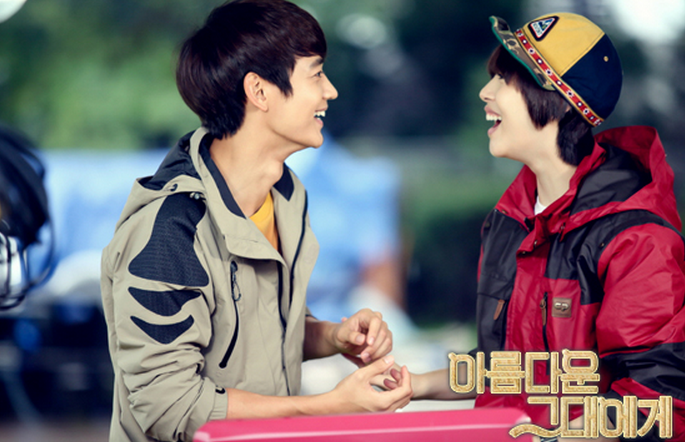 “To the Beautiful You” Episode 10 Preview

Kang Tae Joon: There’s a person who I really want to show that I can jump.
Manager Jang: What?!
Cha Eun Kyul: There might be a dormitory check up soon!
Kang Tae Joon: Do you guys have any porn CDs? Hurry hurry!
Goo Jae Hee: Where were you?
Woman: Ah, so that kid you were with is a male student.
John: She’s a girl. Froggy Princess.
Kang Tae Joon: I’m not going anywhere, so you shouldn’t either.
Goo Jae Hee: I don’t know what’s wrong with me either…
John: If you aren’t going to make Jae Hee happy, let her go.

According to AGB Nielsen, “To the Beautiful You,” starring f(x)’s Sulli and SHINee’s Minho, recorded 5.4% for last night’s episode. The romantic-comedy is about Goo Jae Hee ( Sulli), an extreme fan girl of champion high-jumper Kang Tae Joon (Minho), who tries to make a comeback from a career-threatening injury. To help revive his career, Jae Hee impersonates a guy to attend Tae Joon’s all boys high school. The original Japanese manga had a Japanese drama created in 2007, as well as a Taiwanese version produced in 2006. Both versions were extremely popular, and many international fans are showing great interest in the Korean remake, which is produced by SM Entertainment’s new video contents division, SM C&C.

SBS will air the tenth episode of “To the Beautiful You” tonight, September 13, at 9:55PM KST.