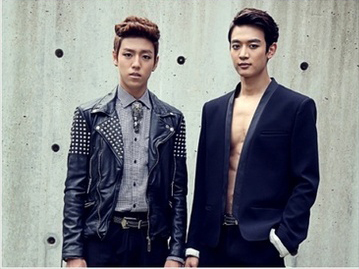 Lee Hyun Woo and Shinee’s Choi Minho took time out of their busy schedules filming for the SBS drama “To the Beautiful You” to transform into “dark guys.”

(Author’s note: possible spoiler below for those who haven’t watched this week’s episode of “To the Beautiful You.”)

On the 10th episode, which was aired on September 12, a professional photographer appears and requests Tae Joon (played by Minho) and Eun Gyul (played by Hyun Woo) to participate in a photoshoot. The following scene shows two sexy guys wearing smokey eye make up strutting their stuff.

Known as an “athlete-dol” in the entertainment industry, Minho revealed his six packs and have gained the nickname “beastly.” Hyun Woo sheds off his delightful and youthful image by wearing thick eyeliner.

Minho and Hyun Woo filmed this on September 7 in Yong-In, Gyeonggi-do. Because of their previous experiences in modeling, they were able to finish within 2 hours.

Have you watched tonight’s teaser? Click here to read the translation and watch the video.

Lee Hyun Woo
Minho
KPLG
To the Beautiful You
How does this article make you feel?