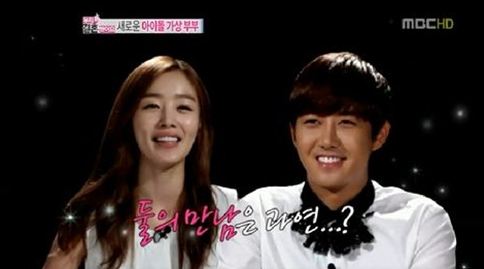 Secret’s Han Sun Hwa Was Worried But Now Glad that ZE:A’s Kwanghee is Her Husband on “We Got Married”

Secret’s Han Sun Hwa and ZE:A’s Kwanghee’s first episode was aired on September 1. ZE:A’s Kwanghee played a hidden camera joke on Secret’s Han Sun Hwa by having his fellow member Siwan go out as if Siwan was her husband. Though she had already heard beforehand that Kwanghee would be her partner, she was happy to believe Siwan would be her partner, and felt surprised and caught off-guard when Kwanghee arrived letting her know he was her real husband on the show. Viewers have enjoyed their tit-for-tat bickering.

Recently, Han Sun Hwa gave an interview with Star News in which she talked about being her participation in the show.

Han Sun Hwa said: “I am so happy because I am able to do the program [“We Got Married”] which I really wanted to do. Because the reaction to the program has been better than I expected, I have also become worried and burdened.”

Han Sun Hwa also added: “At first, as Kwanghee had shown a very honest and unruly image before on entertainment programs, we were both worried. But, now that I think about it, I think it is actually a relief we are partners. Kwanghee supports and accepts my unruliness well.”

Han Sun Hwa
Kwanghee
Secret
We Got Married
ZE:A
KPLG
Siwan
How does this article make you feel?