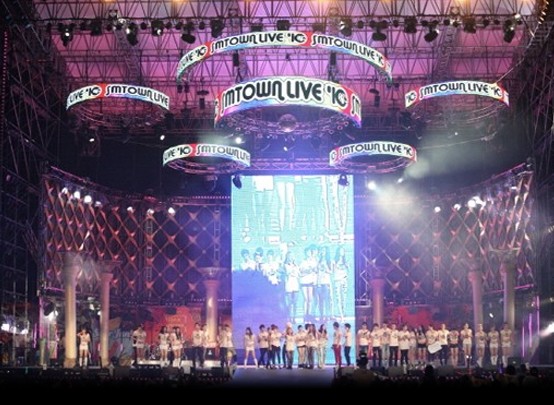 SMTOWN Live Tour III Will Be in Singapore on November 23

Fans in Singapore have been waiting for many years wishing for a concert organizer to bring SMTOWN Live tours to our shore, our wishes are finally granted! Concert organizer Running Into The Sun announced this piece of exciting news to the media during a private event. SM Entertainment artistes such as BoA, Super Junior and Girls’ Generation will be performing in the biggest concert ever held in Singapore with a capacity of 18,000!

Inaugurating the first concert at The Float @ Marina Bay, this will be SMTOWN Live Tour III‘s first performance on a floating stage, which is also the world’s largest floating stage at 120 meters long and 83 meters wide. The floating stage will also house 5,000 mosh pit audience, simply put, the fans can get as close as 10 feet away from the stage!

“SMTOWN is truly the mother of all K-Pop concerts and we’re madly excited to bring this to Singapore. As a massive concert that has only been staged so far at iconic international venues, we hope this concert will impact Singapore and the region to bring progressive music and quality productions here,” says Beatrice Chia-Richmond, Creative Director of Running Into The Sun.

Tickets will be available from September 29 to October 1 for Samsung customers who produce any Samsung handset at SISTIC counters and OCBC Cards members.

Tickets will be released for public sale from October 2 onwards.

Ticket prices and further ticketing details will be released next week by Running Into The Sun.

SM Town Live Tour III in Singapore is presented by Samsung with official card OCBC Cards and proudly organized by Running Into The Sun.