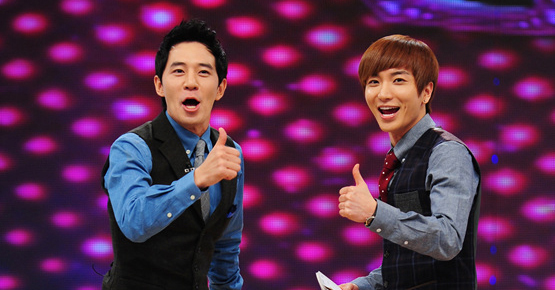 TV personality Boom and Super Junior member Lee Teuk have transformed into mini-hulks, minus all the green and the temper.

It’s been revealed that the duo will make their grand entrance topless on the upcoming episode of SBS’s “Star King,” airing September 15.

The reason? (Do we need a reason? I mean…) They will share their hard-earned sculpted figures after their progress report from a previously aired episode titled “The Best-Bod King.”

At one point, Lee Teuk received a lot of attention for having a figure slimmer than that of a girl group member. He proved that with diligent training and a strict diet, he was able to transform his figure. Boom has also achieved creating chiseled abs, showing a new side to him.

Don’t miss out on the big reveal this Saturday at 6:30pm (KST). Soompiers, what are your thoughts on their bodies? Did you like them before or now?

Boom
Star King
KPLG
Lee Teuk
How does this article make you feel?